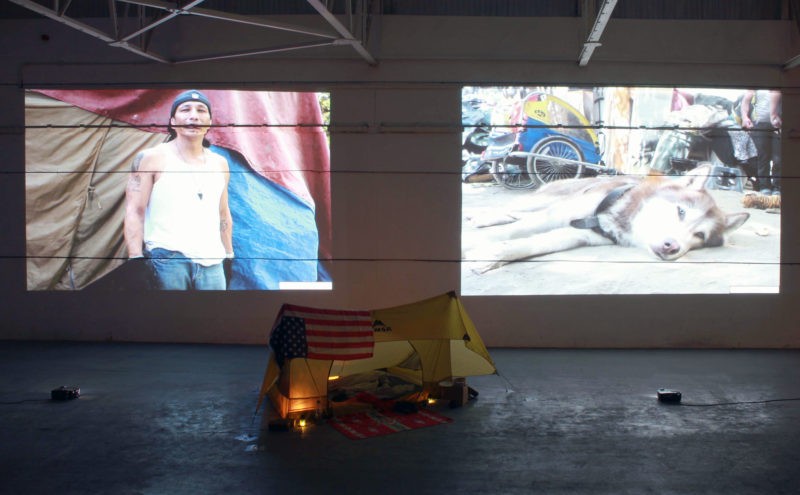 In Failure of the American Dream, Phil America draws the audience into yet another dangerous month of living far below the poverty line, this time in San Jose’s The Jungle, America’s largest Tent City.

In this piece, Phil lives each day with its residents. He learns to defend himself in an autonomous society where its residents are surrounded by violence and despair on a daily basis.

This project is presented in a sculptural form with the tent and its contents, accompanied by a multi-channel video installation.

After spending a month in the tattered slums of Thailand, Phil America showcases the difference between countries and the similarities of desperation.

Failure of the American Dream is an exploration of Third World America and the many left struggling with the daily nightmare of survival while getting lost in the promises of an American Dream.

The work is based on the artist’s performative character living as a homeless American in ‘The Jungle’, the country’s largest homeless encampment. He seeks to bring the reality of American poverty to light while showing the human side of an issue that is frequently sensationalized or ignored by Western Culture.

Through this exploration, he is looking to find the strength and beauty that pervades the lives of this community and expose their ability to overcome adversity. The popularly understood ideology of The American Dream dictates that each American may attain the financial and social status that will make them happy.

Homelessness and the tent city are the anti-dream. These people create autonomous housing on their own terms while putting the dream behind them and focusing on the now. They were each promised something by their parents, their teachers, and their government. They have been denied access to this promise, and now their main focus is survival that comes with the daily struggle.

Failure of the American Dream was first exhibited in London, England, in 2014, in a non-profit pop-up gallery space. It was shown as a sculptural installation paired with a multi-channel video installation projected across one wall of the expansive West Hampstead location.

The sculpture comprises the tent that Phil America lived in during his time in The Jungle and his possessions and belongings used during his month-long stay. The tent was erected in the center of the 4,000 square foot space, providing viewers with an interactive, personal experience.

The large video projections, showing life inside the nation’s largest homeless encampment, fully immersed the viewer in the experience of this dangerous area, introducing them to the human element of its people and a way of life that may otherwise never be seen.

Failure of the American Dream was then shown in Raleigh, North Carolina, USA, at the Contemporary Art Museum of Raleigh.

It marks the first time that this work has been exhibited on American soil. This was powerful for the artist, as the piece was originally intended to illuminate European and other foreign audiences about the wealth disparity that many communities face in the United States.

Showing Failure of the American Dream in the US enabled a more personal and intimate discussion. This exhibition brought together the sculptural installation, the multi-channel video installation, and a sound installation created by DJ Pain1 to simulate in an ambient way the anxiety of life on the streets.

The Jungle is America’s largest homeless encampment, and adjacent encampments in the surrounding area have reached a population of 1,200 inhabitants, with its numbers increasing every day.

It is an extremely dangerous area, where fires are common and fights are a daily occurrence. It encompasses 75 acres along Coyote Creek in San Jose, Silicon Valley. Established six years ago, it has proven to be more of a community than a collection of tents.

Police often raid the Jungle, making sweeps for inhabitants with warrants or those violating parole or probation, and have even found some of America’s Most Wanted living there.

Fights and gang-related violence are rampant and can turn deadly in an instant. Death occurs from an overdose, disputes, and disease. As intense as the encampment is, a resident living nearby may never know it exists, but as you walk down a narrow footpath carved into the hill, you enter The Jungle.

Clark’s Promise is an organization founded in the memory of Clark Grew, helping people who have nowhere else to turn in Raleigh, North Carolina. Through a caring, committed engagement nurse, Clark’s Promise assists with medical care, medicine, and other basic needs. They also connect the homeless with other area organizations that can help sustain them with love, compassion, and respect.

The Valley Homeless Healthcare Program is a grant-funded program with staff providing medical care to more than 7,000 homeless patients a year. Their mobile unit, along with the physicians, nurses, mental health experts, and outreach workers visit The Jungle every week.

They offer medical services from the unit and go into the encampment to provide survival kits. Those needs surpass that of the mobile unit are driven to their local clinic, where they have a complete medical and psychiatric staff.