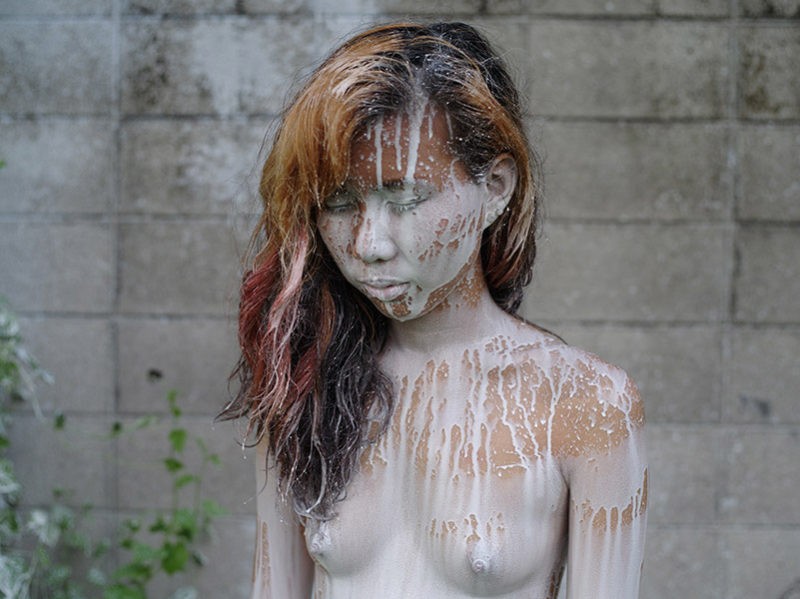 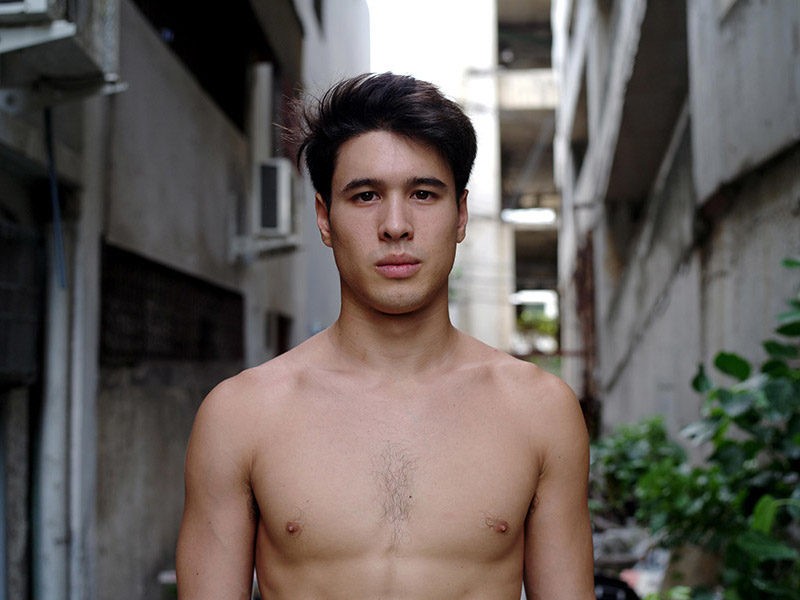 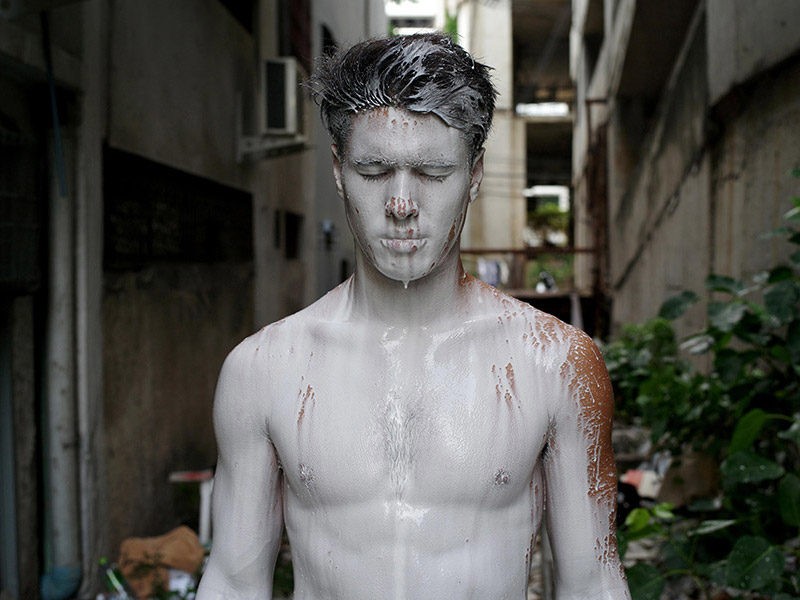 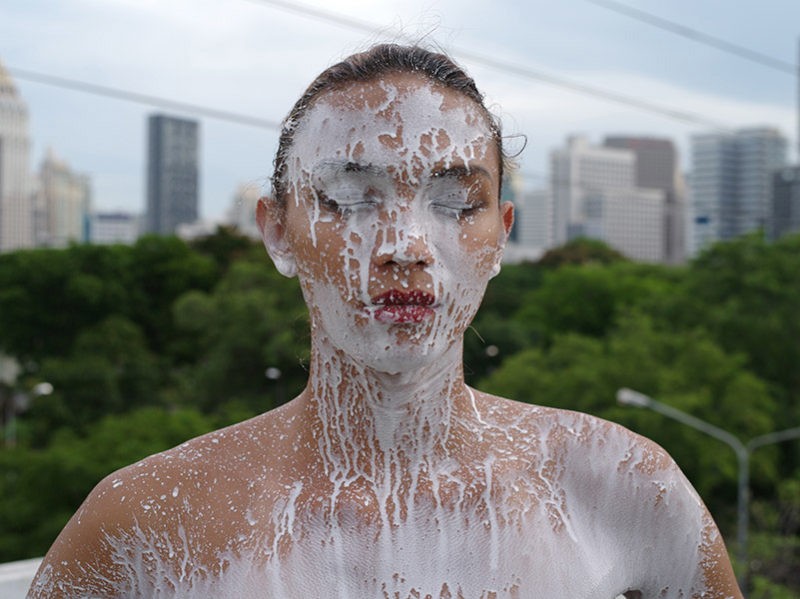 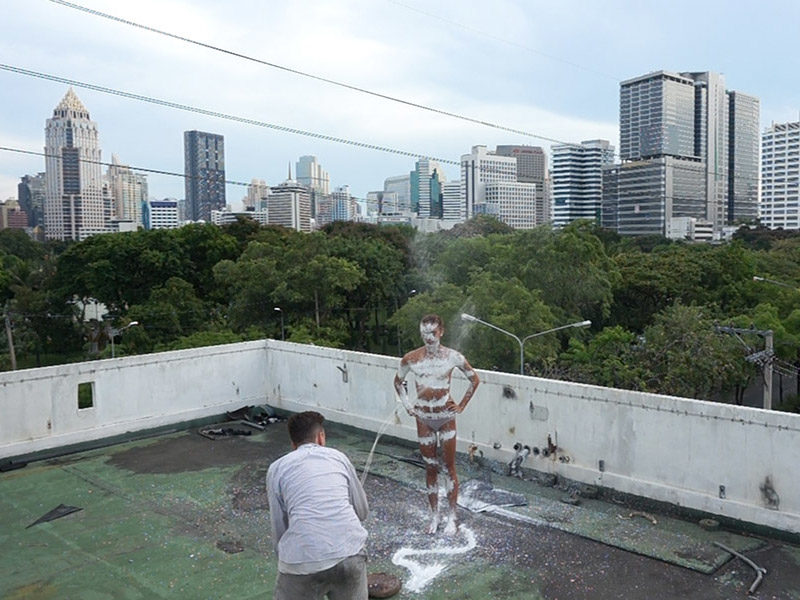 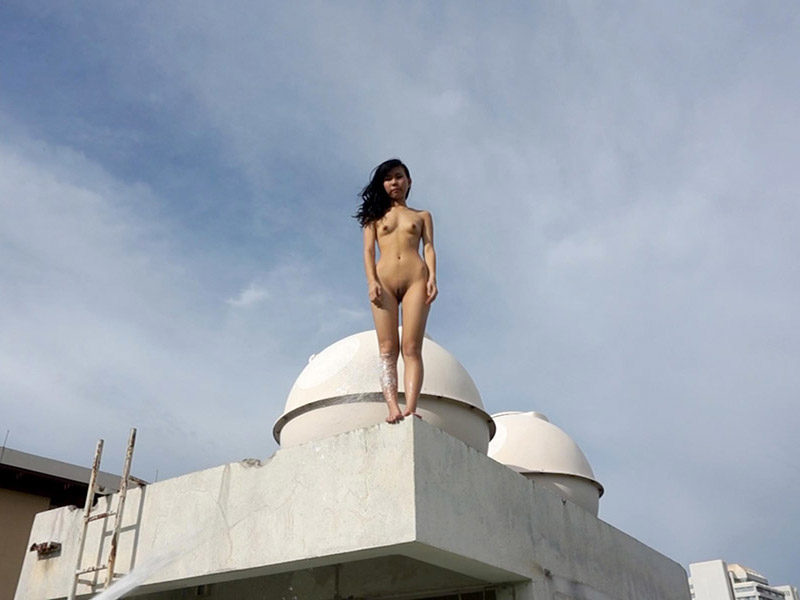 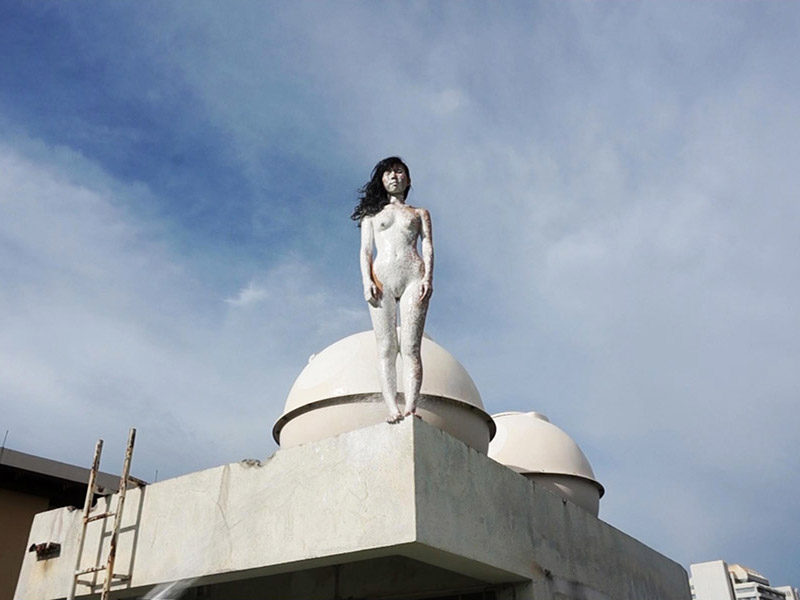 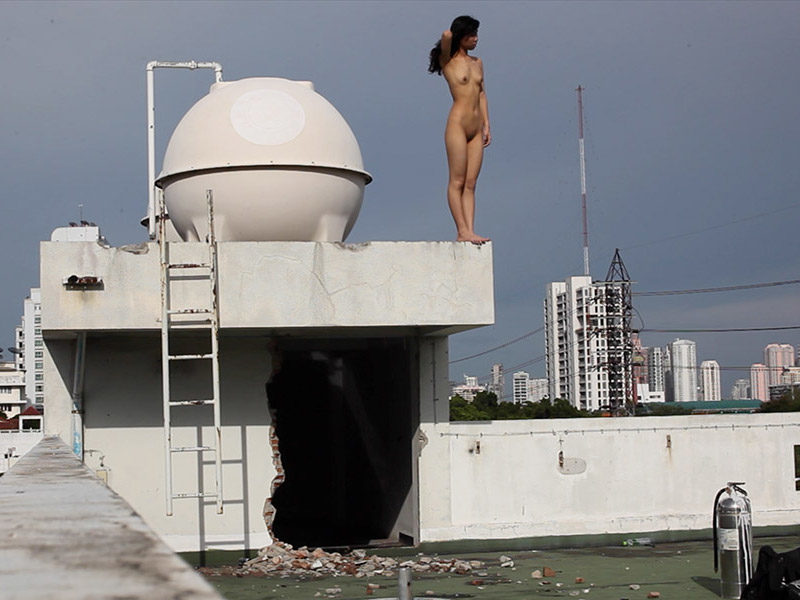 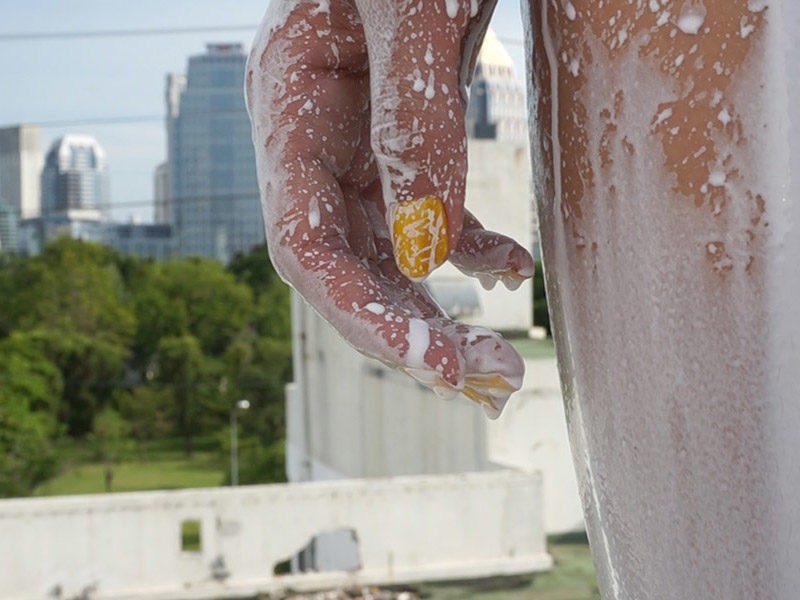 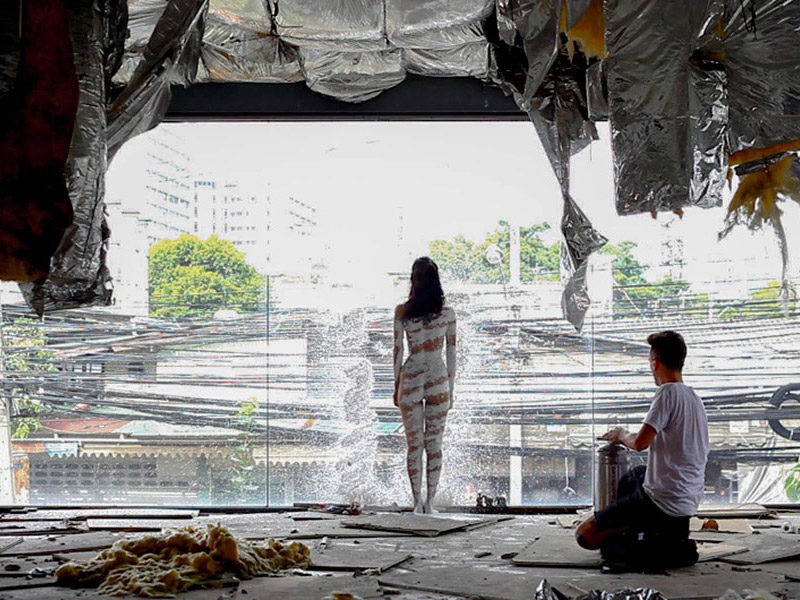 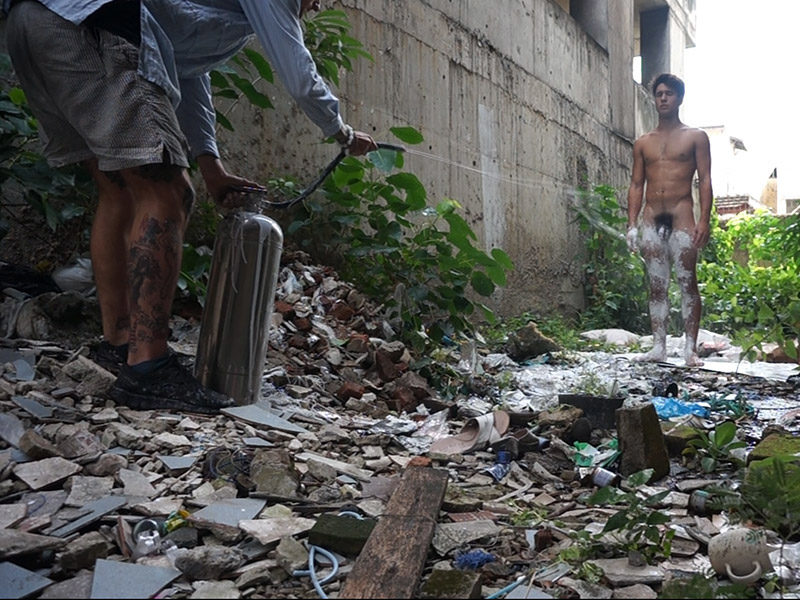 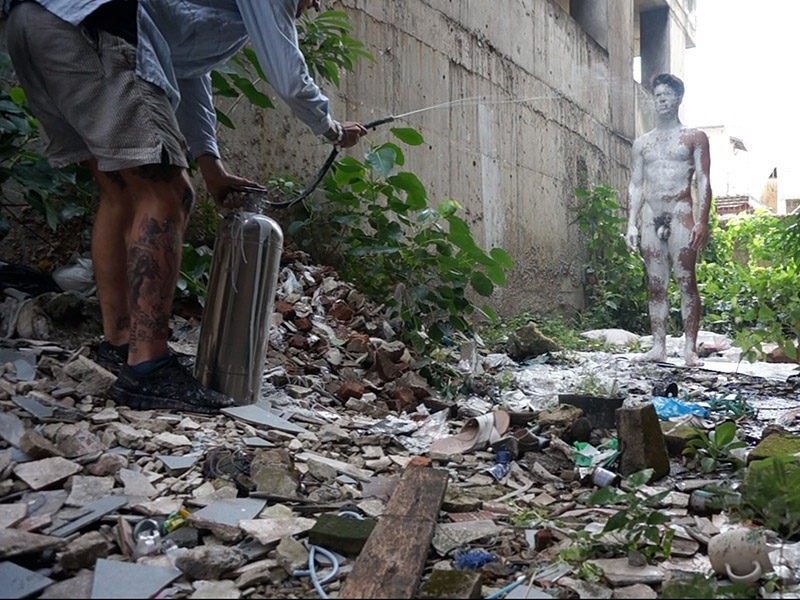 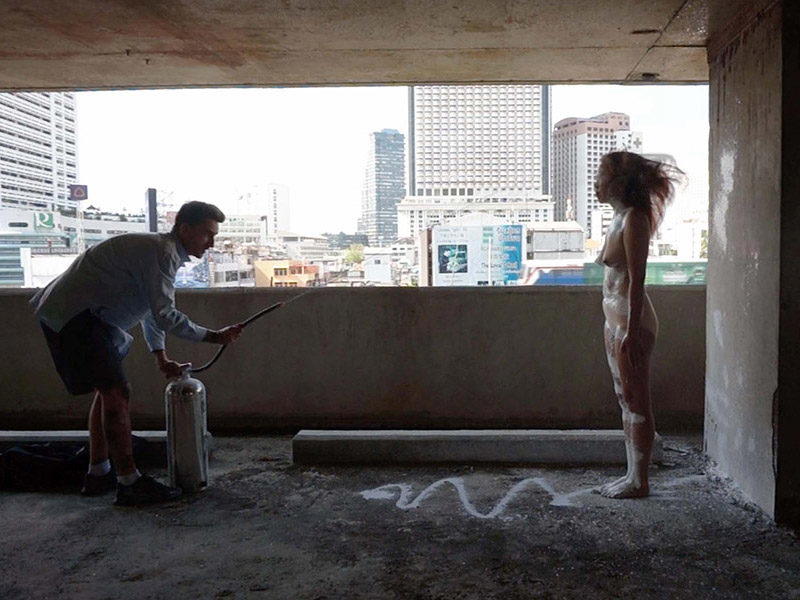 White Ambition is a sculptural installation shown together with a single channel video performance project filmed in 2013 in the heart of the world’s most visited city, Bangkok. In the project, Phil America explores the relationship between the people of Thailand’s fixation on classism and beauty and how it relates to their desire to have whiter skin.

In response to daily usage of whitening creams, skin bleaching procedures and cultural acceptance of injections to change one’s skin color, we show through a narrative of video and photos numerous Thai males, females, and ladyboys in a public space being sprayed over their entire body with latex paint pressurized in fire extinguishers. While nudity in public is illegal and frowned upon in every Buddhist and Muslim country in Asia, all the performers in White Ambition are nude to bring about an interpersonal dialog relating to Ethnographic photography and imagery that has become extinct in Thailand due to modernity.

From traveling to Bangkok, pressurizing and filling the extinguishers with paint, the act of spraying of the models from the first moments to the last, the permanent mark left on the city the residual outline of each painted model leaves on the city, and the proceeding photo sessions of portraits capturing the models’ paint-covered faces, the execution of the process was fully documented using both video and photography.

The intention of this project is to initiate a social discourse questioning Thailand’s divided social status amongst men, women, and ladyboys with focus on their lack of upward mobility, questioning how it relates to their preconception of one’s ascribed status as well as their beauty. In Western culture, lotions and tanning booths are frequently used by all genders in an effort to look more attractive. In contrast, within Thailand, whiter skin implies status and indicates one’s membership in a higher class. Whiteness is considered a very relevant element for one’s beauty, while darker individuals are considered lower people and of less beauty. Tua dam, or black body, is a derogatory term for a dark-skinned Thai belonging to a low social standing, as well as other terms such as e dam (black girl) and dam tap pet (black like a duck’s liver). Bombarded with billboards advertising lightening techniques, makeup, and creams made specifically to change the tone of one’s skin, Thais of all socio-economic backgrounds and genders strive to be lighter.

While many attribute other Asian countries’ desideratum for fairer skin, such as India or Sri Lanka, to previous longstanding colonialism by Europe, Thailand’s lack of previous colonization brings about a question: Why? According to Patricia Goon and Allison Craven’s article Whose Debt?: Globalisation and Whitefacing in Asia, Representations of skin whitening are strategic and localized and sufficiently generalized to embrace the desires of Asian women and men—some advertising explicitly calls on desire for male approval, and endorses fair skin as something essential to femininity. The advertising specifically resurrects a regime of visible contrast and comparison based on the binaries of both patriarchal as well as colonial hierarchies. The active process to become white through sessions of lightening represented through many of the advertisements for surgeries is detailed on the products and in the doctor’s offices across the country as a means to become more beautiful and have access to better chances in life.

The central theme of the project is meant to illustrate how the concepts of skin color have been dishonestly derived as biologically bound predictors of future actions among those who have a certain skin color. In doing gender, first presented at the American Sociological Association in 1977 by Candace West and Don Zimmerman and published in an early issue of Gender and Society in 1987, they state that the reason race and class were not adequately considered in earlier years is because the feminist movement has historically been the province of white middle-class women in the developed world who were not sufficiently affected or attuned to the nature of these corollary oppressions. Many of the women in this select group had access to institutes of higher education and were able to educate themselves on the issues. West and Zimmerman go on to say that when individuals recalibrate things to produce alternative ways to conceptualize interaction patterns, it amounts to social change.

Naomi Wolf argues that the myth of beauty—the struggle for equality that women face—is the final hurdle. She states in her book The Beauty Myth, “…Asian women undergo surgery not as a consequence of self-vanity, but in reasonable reaction to physical discrimination”. Men, on the same note, tend to desire whiter skin more out of a perceived standing in the workplace. While some might speculate at first sight the desire of Thailand’s population to have white skin is a grossly negative side effect of a nation’s deep-rooted social issues, the rapidly hegemonizing global economic cultural sphere seems on the cusp of becoming a continent-wide phenomenon or a grossly humiliating thing of the past.

Cultural identity, gender, and virtue are often associated with whiteness. Erving Goffman, the Canadian sociologist and writer, made the claim as early as 1967 that a white face and white skin can be identified as a form of performance which presents and re-represents the beauty and virtue of an individual within the community. This brings about the obvious issues of social and cultural distinctions in terms of racial and even historical backgrounds, as classism and even racism are developed socially and not biologically. The yearning for access, acceptance, better chances and desirability has brought about a cultural phenomenon that has seeped so far into Thailand’s society that it has become the norm.