Adrian Paci’s artwork, Temporary Reception Center (2007), is a powerful take on the political themes of displacement. Paci, an Albanian artist, captures the drama of migrants, the denied hope, and the uncertainty of life in a new environment in this art piece.

With his work, the artist makes a statement on the refugee crisis and shows what happens in detention centers to paperless immigrants, whether they are awaiting receipt or deportation. It captures the temporary but harrowing experience of waiting with hope and hopelessness.

So, what does the Temporary Reception Center involve? This film by Paci depicts a group of people, mostly Mexicans, who stand on an aircraft stairway. The stairway in a Californian airport is a center where the migrants feel as though they are in a portal arriving after fleeing their respective countries. Paci uses the video technique to focus on the migrants’ faces and successfully captures their uncertainty.

The video also depicts the people as they walk on the runway at the airport while hoping for someone to tell them what to do and where to go in the eternal wait of the traveler. Their lives at that moment are uncertain and in motion. The situation begs the question, where are they traveling to?

Thus, Centro di Permanenza Temporanea is an outstanding art piece that authentically shows the migrants waiting on a ladder on the airport runway. The video opens with a long shot of the stairway with the airport noise in the background before it pans to a group of people walking in a single file as they approach the stairway before climbing up the stairs. They look on as a jumbo jet passes by.

What follows is Paci focusing on each of the individual faces from different angles. One thing that is painfully evident at this point is that none of these people are smiling. There is only uncertainty and a desperate kind of hope that can be seen stamped upon their faces.

The video excellently captures the people’s expectations of change and communicates this uncertainty rooted in both hope and hopelessness. It reflects on the experiences that migrants go through and invites the audience to have a dialogue on the political and social transformation in their society and government.

Another thing that makes a statement regarding this video is the fact that the people move with a kind of patience that seems almost unnatural. They form a queue and gradually fill up the stairs though they must squeeze together to make space for those coming up after them. They are hoping for a better day, a better future.

This video’s title is a reference to the Italian name for temporary camps for illegal immigrants that are littered in Italy. Thus, the themes of migration, identity and the consequences that social, political, environmental and cultural changes have on people’s daily lives are captured in this work of art.

Paci is well aware of the power of images. He warns that images used in the media do not leave a viewer indifferent. He calls the violence transported in these visuals “almost seductive” and cautions to avoid daily media consumption that he compares to noise. According to him, news has the ability to paralyze and make one feel helpless.

A view of Paci’s Temporary Reception Center begs the question, who is he? Adrian Paci is an artist born in Shkoder, Albania, in 11969. He migrated from Albania to Italy. This immigration experience and what he heard from family and friends who also moved to Italy inspired his urge to tell such stories through it. As such, through his art, Paci addresses stories of exile, memory, identity, hope and collective history. 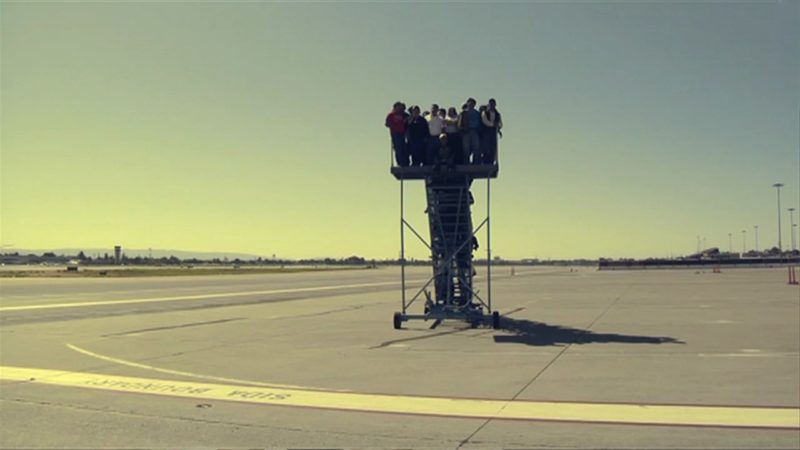 In an interview, Paci explained that he is not interested in giving himself a social mission and points out1 that the personal dimension is fundamental to him and his work, both when conceiving and creating the work. He stresses that he wants to initiate a critical discussion through his artworks.

In a speech at the Auditorium di Mecenate, Paci said2:

Obviously, I can’t hide it: my work often deals explicitly with immigration issues, but I’ve never been interested in presenting myself as an immigrant artist, an artist who wants to use the immigration flag. I’m interested in what happens in this transition situation. I believe that the truth is no longer in a situation of stability, I believe that the truth is found more in the moments of transition.

He does not shy away from tackling these political and social themes, addressing political shifts and life in exile. As an artist, Paci uses media such as installation, video, painting and photography to reflect on such stories showing the everyday life of people as they grapple with the loss of identity, belonging and the hope that comes with relocation.

All images: Courtesy of the artist, Kaufmann Repetto Milan/New York and Peter Kilchmann unless otherwise noted.