Who is Danila Tkachenko

Danila Tkachenko (b. 1989) is a Russian visual artist, specializing in the field of documentary photography. He is known for winning the World Press Photo prize for his series Escape.

Tkachenko gained a degree in documentary photography from the notable Rodchenko School of Photography and Multimedia.

Escape is a series about individuals who have disassociated from society and live as hermits in the wilderness of Russia and Ukraine. Their motives, however, for being alone deep within the woodlands are intensely personal and have nothing to do with the religious conviction.

Instead, they are united in a bid to forsake the control and conformity of modern civilization in pursuit of a more authentic, individuated style of being. In other words, they are searching for a means of embracing their authentic selves.

Tkachenko made a point to seek out those who deliberately tried to escape their social life, such as school, work, and family. To some of the individuals, their former life with all of their obligations became a prison.

They decided to live as outcasts or hermits, far from other people, villages, or even towns. Through that process, they are slowly giving up their social identity while becoming closer to nature.

In a span of two years, Tkachenko found fifteen people willing to take part in his project. He usually brought food with him to his first meetings since that was the most precious to most of them, living far away from supermarkets.

After introducing himself and presenting his project, he waited for the proper light to take photos. In an unfortunate twist, one year after completing the project, Tkachenko lost all of his film rolls and had to revisit everyone.

Interestingly, Tkachenko himself got lost in a forest himself before. He spent a month in the woods of Altai (Russia) without any people around him. After a while, he observed that his thinking and behavior changed.

According to the photographer, this can be attributed to the cultural context of his upbringing. Tkachenko calls his identity an artificial construction created under this influence. This experience also explains his motivation to visit the hermits. Tkachenko says1:

I was interested in meeting people who had cut themselves off from society for a long time, comparing themselves to others, and understanding how a person develops outside the cultural context. In this project, I was more interested in society than in the phenomenon of hermits. Looking at them, I studied the social environment and its impact on myself.

Talking about the series, the photographer said2:

While exploring their experience, it is important for me to understand if one is able to break free from social dependence and get away from the public to the subjective – and this, to take a step towards oneself. I am concerned about the issue of internal freedom in modern society: is it at all reachable when you’re surrounded by social framework all the time?

The individuals in the photos

All in all, the photographs in Escape are both charming and disconcerting and tell the audience far more than their empirical content. In one image, we can see a man asleep, serenely stretched out on a plane trunk of a fallen tree, which suggests peace and tranquility, a comforting image of an object in harmony with nature.

However, the following picture tells a different story. Another person deep in the woodlands – gaunt, no longer has fledgling, with a spooky look in his eyes that inevitably takes your attention away from the lush scenery of the trees, blackened pine trees, bramble, and mushrooms.

Of all the images in the book, only one features a nude subject who faces the side of the camera with arms aloft, suggesting some degree of contentment. Another image that perhaps speaks volumes about the “escapers” has a man covering his face entirely with his hands, symbolizing the subjects’ attitude towards society.

Mankind is fatally ill with a terrible disease named lack of soul. Salvation is now only possible through escaping alone. Common efforts are fruitless. It’s too late.

Other escapers, however, hint at problematic past lives from which escaping was the only way out.

The environment in the photos

The images of the subjects’ makeshift quarters range from flimsy, provisional structures to secure-looking carven dwellings and, in some instances, accommodation places with formal entrances, indicating that the escapers possess different personalities within themselves.

Besides humans, another subject to Escape is nature. Surrounding the men and their small abodes (there are no women) is a thickness of greenery and vegetation. The delicate shades of green become entangled in the flash of the camera, capturing a world important in its own natural reality.

Escape begins by leading the audience directly into the jungle, through a hole in the vegetation as dark as a cavern. The first five images of the book are dark and forbidding of unwelcoming forest habitat. They are devoid of any humans. The audience keeps treading through several full-bleed spreads of extremely dark and dense backwoods until the first image comes up, of a deep wrinkled eyes man who appears a bit indifferent to the presence of the photographer.

Escape is an extensive collection of 129 pages with 44 images and is meticulously designed. The printing has an unbroken palette. Every portrait presented by Tkachenko in Escape is almost exactly strictly the same. Every character is gallingly centered in every portrait. The distance is also almost uniform. Tkachenko uses only horizontals with little interest in the frame apart from a wall of greenery.

The portraits in this series possess an element of minimalist and timeless elegance despite being taken by a digital camera in full color, something that one would associate with traditional black and white film. Undeniably, the pervading greenness of the series renders a lush wonderland, one which the unnamed escapers have rid of their social skin and fused with the very life force of the woodlands itself.

Tkachenko is aware of how this world dwarfs the lives of the humans that are apparent subjects. The wilderness appears extremely indifferently to those who might look for shelter there from the troubles of their past lives, from the unkindness of the human society. 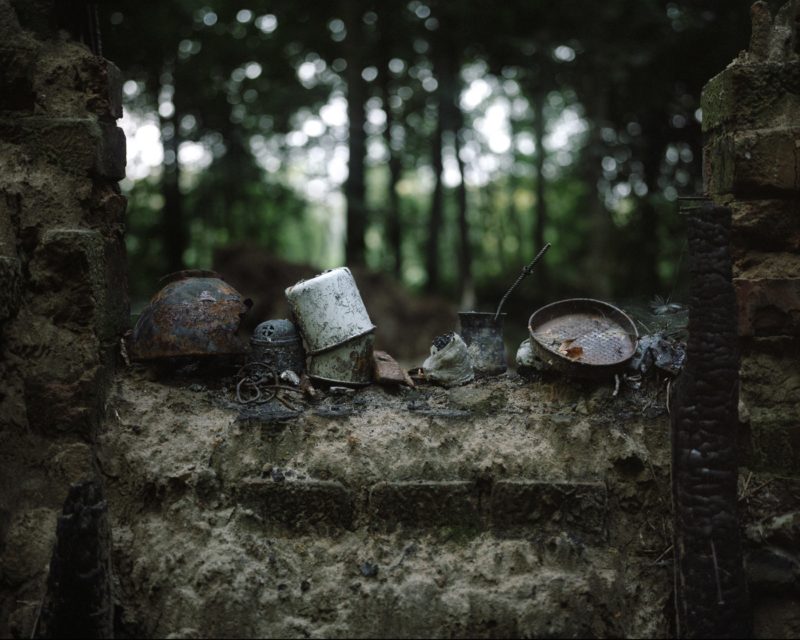 It took Tkachenko three years4 to put together Escape and this has paid off. Escape has been exhibited in art spaces across the world. Some of the images have been featured in magazines, such as the British Journal of Photography, the Washington Post, and Spiegel.

The theme of Escape is the role of the individual in a society. The piece raises questions about what our identity really means when we are compelled to live by the rules of society. While the images in Escape do not transcend its obviousness, the theme is black and white for everyone to understand.