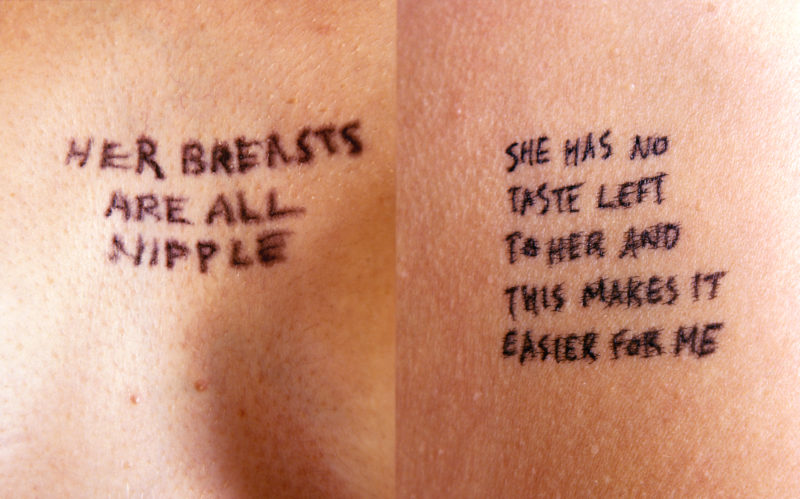 Jenny Holzer – Her breasts are all nipple & She has no taste left to her and this makes it easier for me, from the Lustmord series, 1993-1994, ink on skin

What is Jenny Holzer known for?

Conceptual artists are well known for favoring ideas that completely reject standard and accepted notions of art, and Jenny Holzer is no different. As one of the most recognizable conceptual artists of her time, Jenny Holzer’s work strives to explore the spirit of art, giving special prominence to the use of language. As one of the most awarded conceptual artists of her generation, Holzer is widely praised for her use of provocative language-based public works like Lustmord that deal with powerful subjects of disease, torture, gender inequality, and death.

A well-known Neo-Conceptualist1 artist, Holzer has always used the standardized rhetoric of information systems and technology to highlight political discourse. Having begun her long and prolific career in the 1970s, she quickly gained ground due to her Truism series of one-line dictums and sayings that were wheat pasted to buildings and walls all over the Manhattan area of New York.

Lustmord was created as a response to the methodical rape and murder of women that occurred as a result of the irrational act of ethical cleansing during the Bosnian War2. Lustmord was created to draw people’s attention to these brutal acts. The works were created between 1993 and 1994 and featured a total of three poems that recounted the sex crimes3 that took place during that time from the perspective of the victim, the perpetrator of the sex crimes, and the observer.

The title Lustmord was taken from a German word used to mean sexually inspired murder. Aside from creating the poems, Holzer also included an LED installation. The texts from Lustmord were represented in various other formats. For instance, the Süddeutsche Zeitung, the Sunday magazine belonging to one of Germany’s largest daily newspapers commissioned Holzer4 to reproduce up-close photos of the texts that were handwritten in blue, black and red-black in on skin.

Lustmord was also reproduced for a house whose walls were made of sheets of leather. These different formats allowed the audience to have multiple viewing experiences that permitted them to understand the subject matter better.

Lustmord was a powerful and thought-provoking project not only because it featured texts, images, and objects that forced audiences and observers to look at their own bodies more closely but also because it featured brutal acts that actually happened in real life. Textually, Lustmord described the actual rape and murder of Bosnian women in three voices; from the females experiencing the torture, the male performing the crimes and the gender-neutral witness to the entire terrible event. The first-person accounts given in the poems were explicit and painful. In so doing, Holzer managed to implicate the audience through their personal interpretations of the work, which then forced them to closely examine how women are treated and how society responds to rape culture and victim shaming. 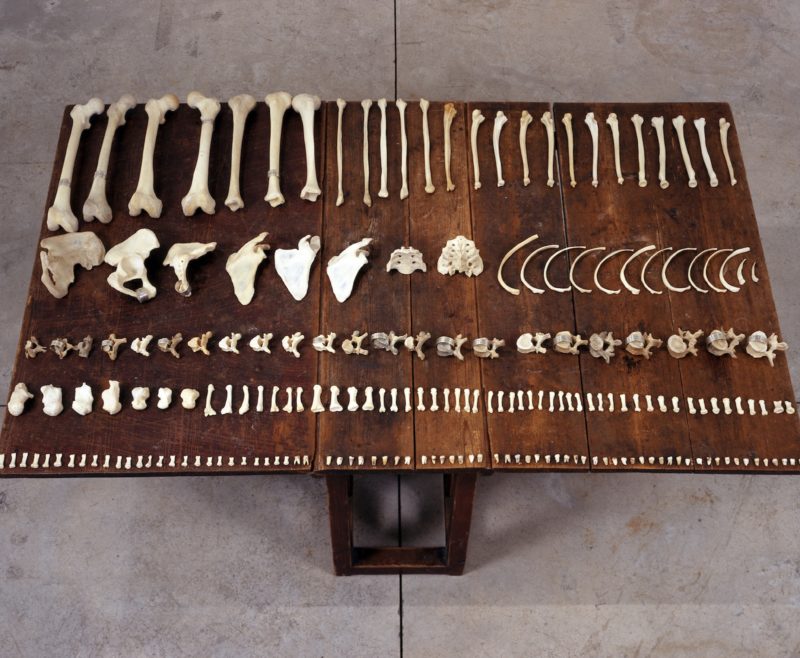 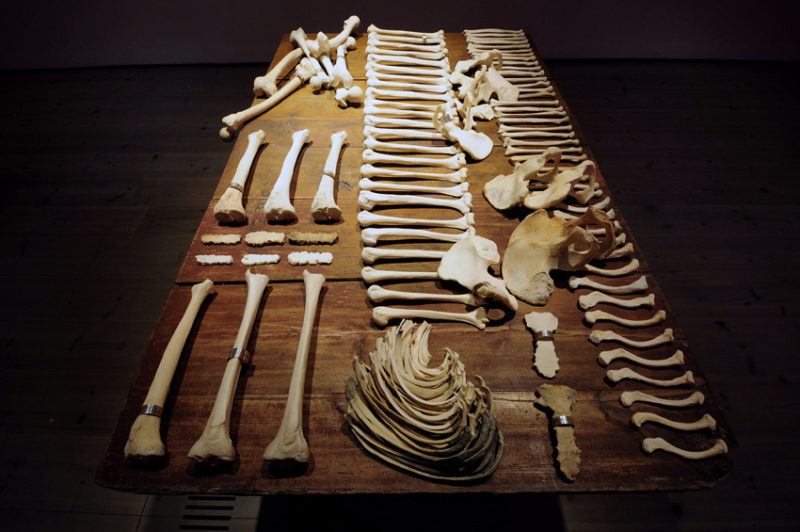 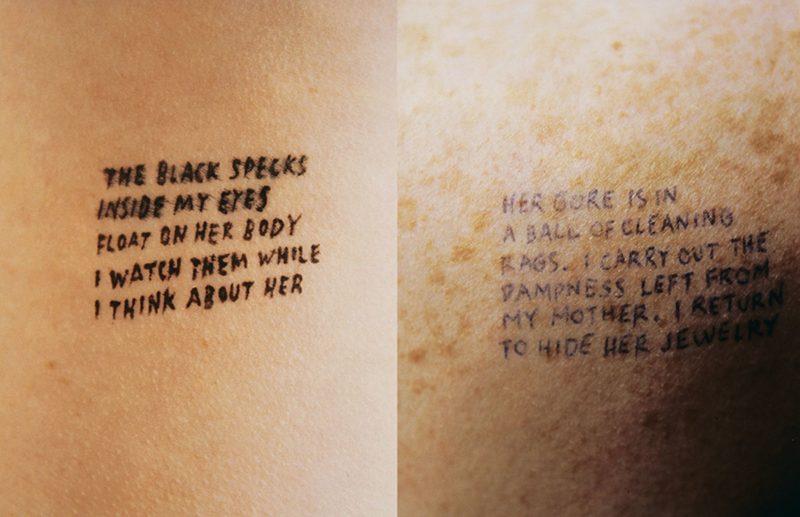 Jenny Holzer – The black specks inside my eyes float on her body I watch them while I think about her & Her gore is in a ball of cleaning rags. I carry out the dampness left from my mother. I return to hide her jewelry., 1993-1994, ink on skin 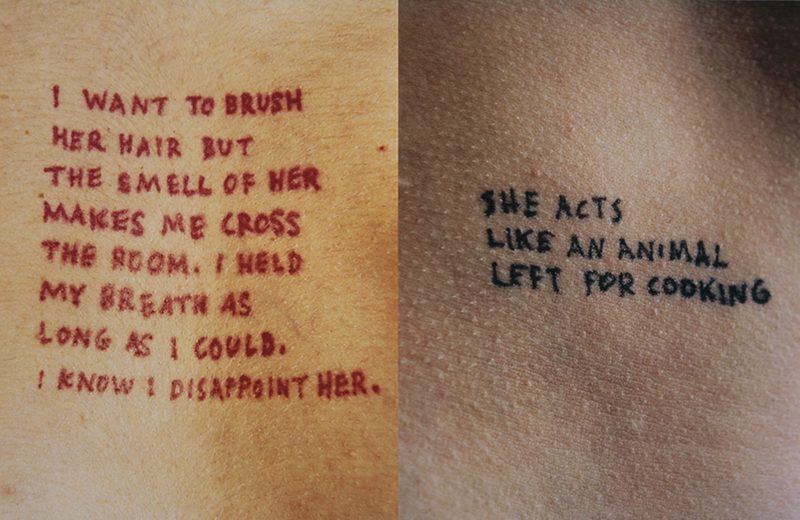 Jenny Holzer – I want to brush her hair but the smell of her makes me cross the room. I held my breath as long as I could. I know I disappoint her. & She acts like an animal left for cooking series, 1993-1994, ink on skin 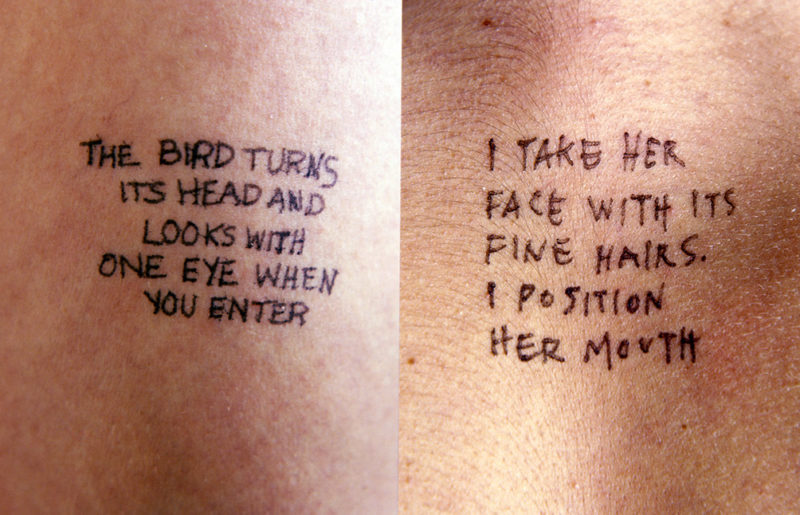 Jenny Holzer – The bird turns its head and looks with one eye when you enter & I take her face with its fine hairs. I position her mouth, 1993-1994, ink on skin 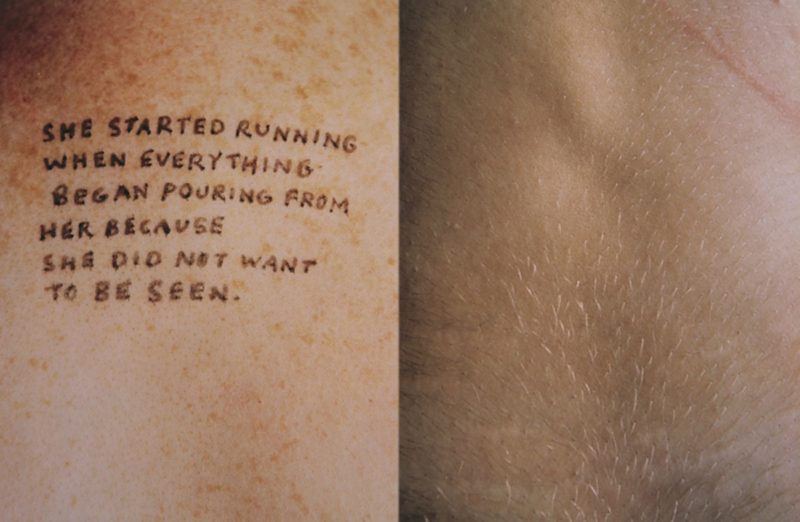 Jenny Holzer – She started running when everything began pouring from her because she did not want to be seen., 1993-1994, ink on skin 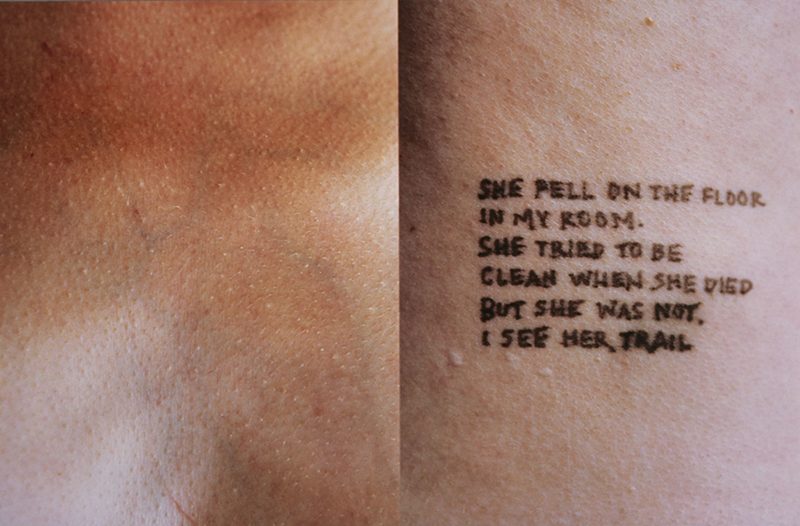 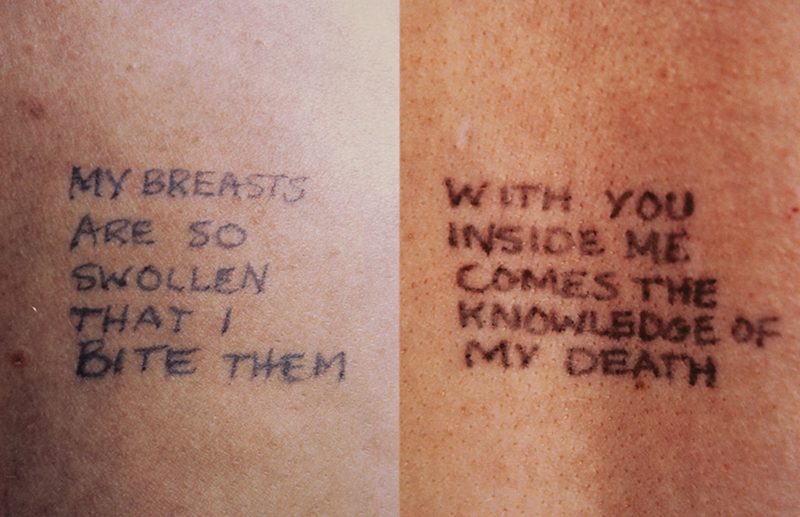 Jenny Holzer – My breasts are so swollen that I bite them & With you inside me comes the knowledge of my death, 1993-1994, ink on skin 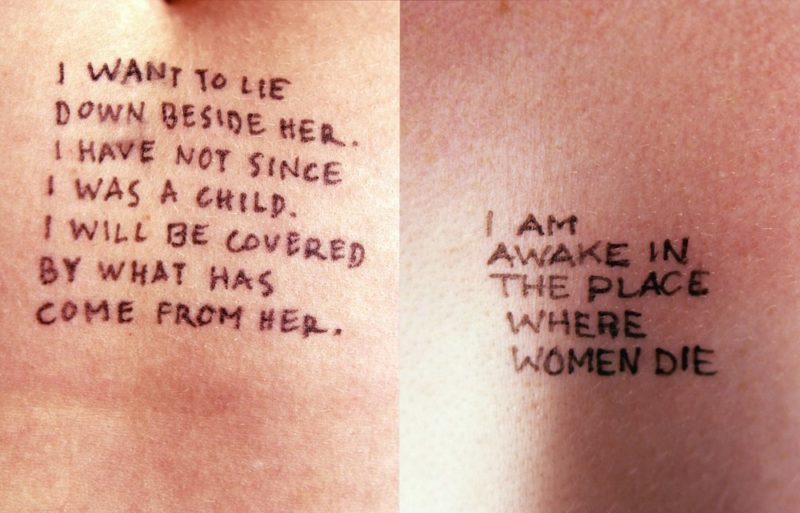 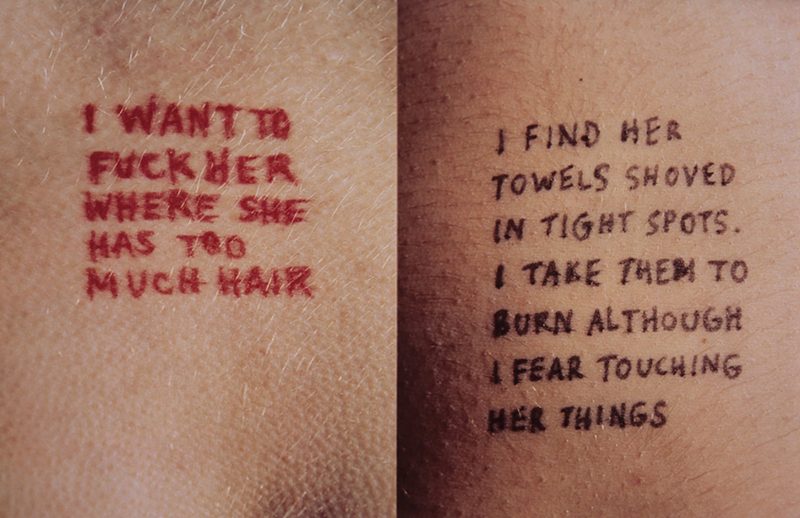 Jenny Holzer – I want to f*ck her where she has too much hair & I find her towels shoved in tight spots. I take them to burn although I fear touching her things, 1993-1994, ink on skin 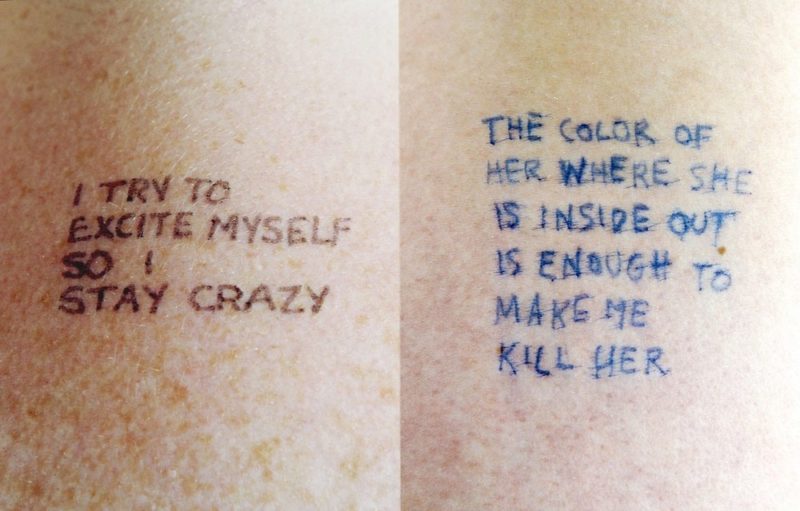 Jenny Holzer – I try to excite myself so I stay crazy & The color of her where she is inside out is enough to make me kill her, 1993-1994, ink on skin 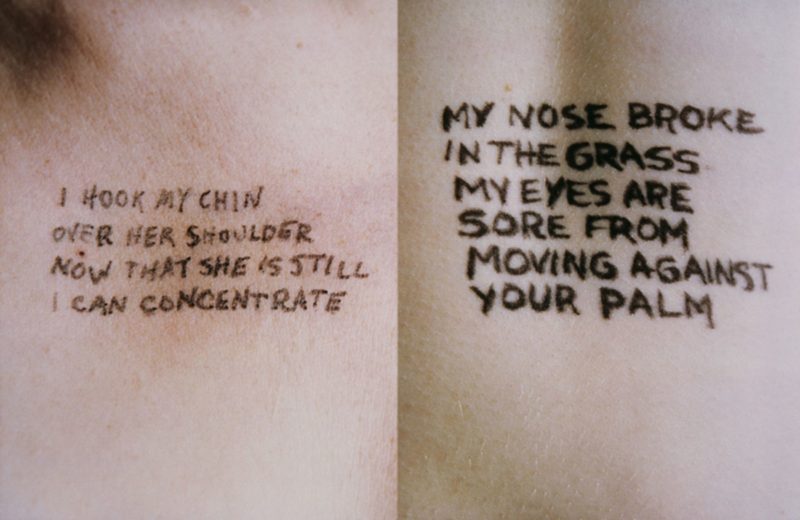 Jenny Holzer – I hook my chin over her shoulder now that she is still I can concentrate & My nose broke in the grass my eyes are sore from moving against your palm, 1993-1994, ink on skin 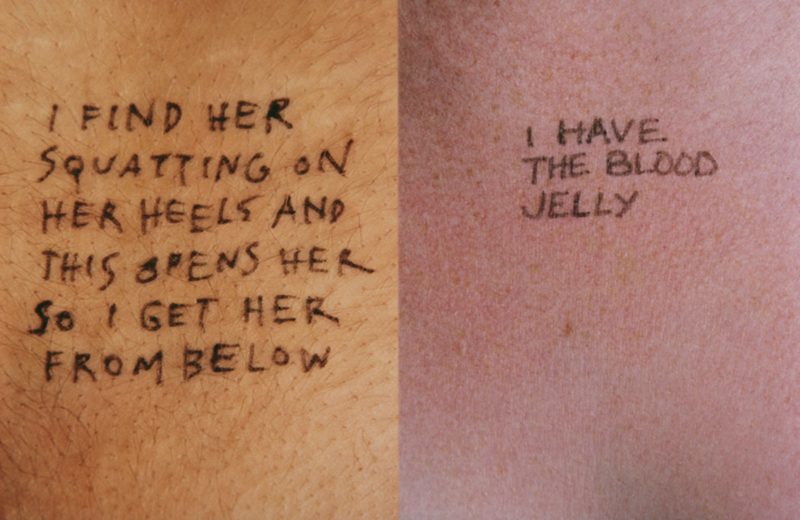 Jenny Holzer – I find her squatting on her heels and this opens her so I get her from below & I have the blood jelly, 1993-1994, ink on skin 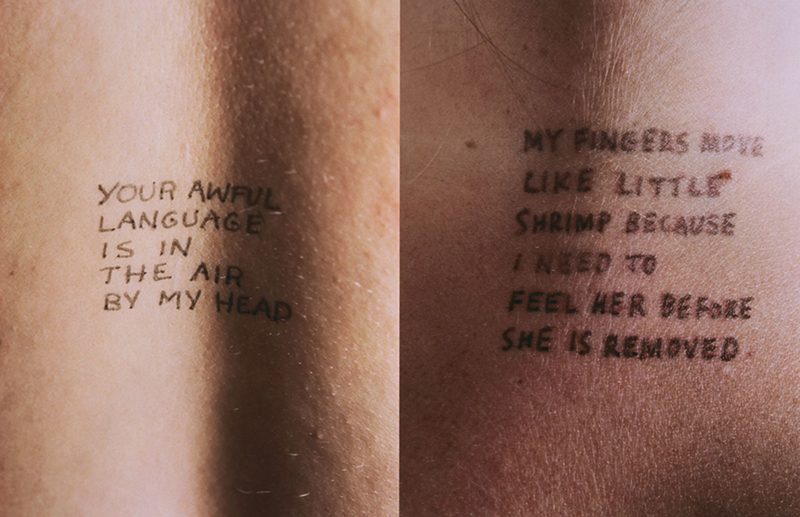 Jenny Holzer – Your awful language is in the air by my head & My fingers move like little shrimp because I need to feel her before she is removed, 1993-1994, ink on skin 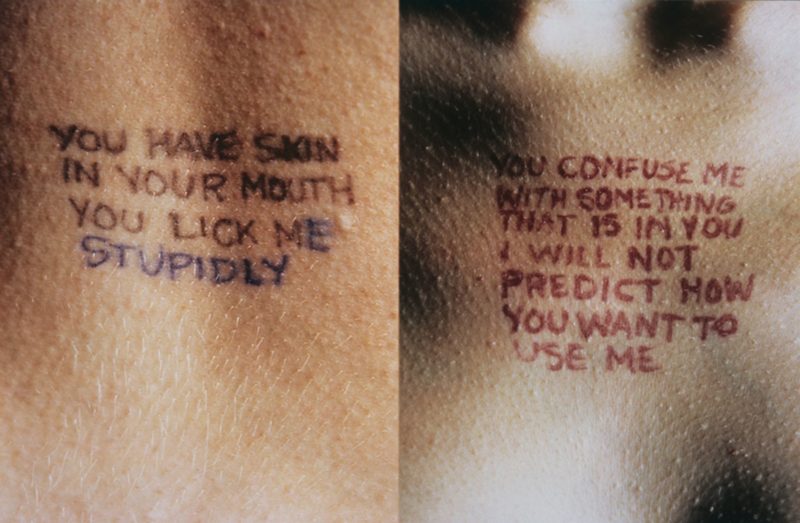 Jenny Holzer – You have skin in your mouth you lick me stupidly & You confuse me with something that is in you I will not predict how you want to use me, 1993-1994, ink on skin

All images by Jenny Holzer/jennyholzer.com unless otherwise noted. 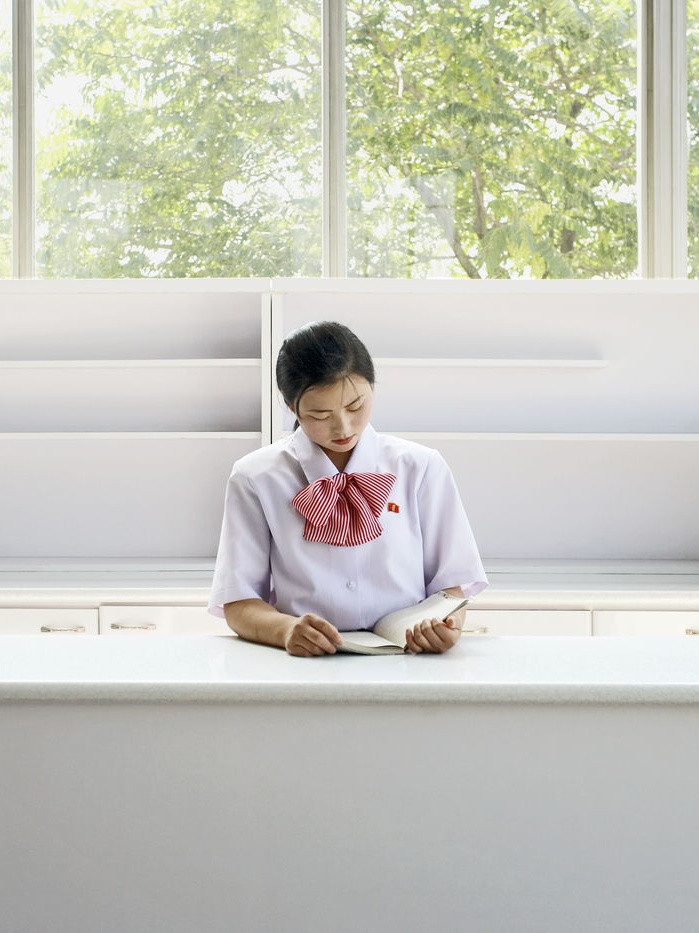 Philippe Chancel & Eerie North Korea – A look behind the curtain 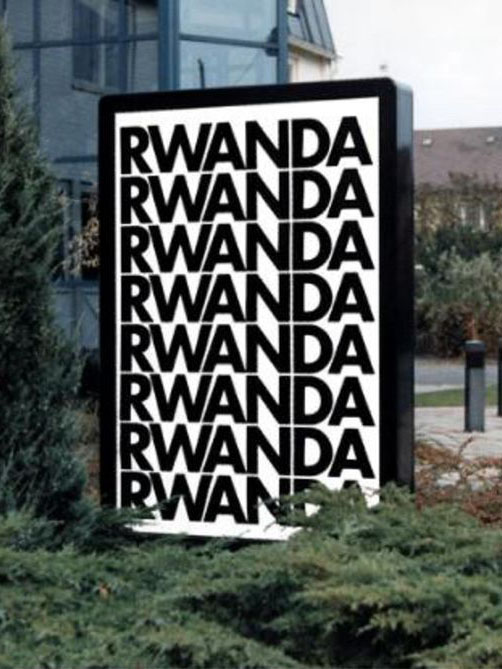 This was Alfredo Jaar’s Rwanda’s project

Want to support us? Want to see less ads? Be part of our fully independent operation and support us with a donation. We are a fully independent operation. One hundred percent of our editorial content is specifically commissioned. Contributions can be made with PayPal or by credit card.
Support us
Photography, Tattoo, 1993, 1994, activism/social justice, Balkan, conceptual art, Jenny Holzer, war
Click here to cancel reply.