Roy Lichtenstein1 was a very famous pop artist who passed away in 1997. He became a leading figure in of the new art movement Pop Art2 together with Jasper Johns, Andy Warhol3, and James Rosenquist. Pop Art is a painting style that involves bold and cartoon-like drawing, often integrating text and image. These days, Pop Art is synonymous with this artist. Most of Lichtenstein’s works defined the premise of pop through parody.

What is Pop Art?

This art movement started in the 1950s and is now very common. It started to become more popular in the 1960s and represented a rebellion against strict ideas about content and form in art. Pop Art additionally aimed at creating art that had a mass-produced feel. It was designed for the masses.

Happy Tears was painted by Roy Lichtenstein in 1964 and is a prime example of the artist’s unique painting style. It features his classic combination of bold lines and colors, all of them applied in the form of dots.

The painting features a central female figure. If you look at the figure closely, you will notice that she is experiencing strong emotions. Her nails match the color of her hair. This shows that there’s a sense of almost mass production with the image.

Watch the position of the fingers in the picture, this is actually what makes it more emotional. It shows that the woman radiates a sagaciousness of respite over something that we cannot clearly state. Now it is no very clear as to what was influencing the emotions in the picture or even what makes the difference in this case. The woman has a flaming hairstyle which may also be an indication that she is from an unkempt background.

The artist has used the same type of color of paint for both parts of this painting. This makes it very clear to notice that this girl is painted by an artist and she doesn’t resemble a real character.

Most of his works have both three dimensions and two dimensions feel to it. This artwork is not an exception. This is facilitated by the fact that he uses a pattern of repeated dots that help to make the woman’s skin. This makes you notice that the woman is unreal. As a matter of fact, the dots make it easy for this to show. It adds the sense of depth and verve to Lichtenstein’s depiction of her.

Lichtenstein made this 96.5 cm × 96.5 cm (38 in × 38 in) piece of artwork to show that there’s a way you can express your emotions with art. As a matter of fact, you must have noticed that the woman is laughing and crying at the same time. This tells us is that she’s crying of joy.

Lichtenstein exposed the real meaning of pop art. He wanted the people to know that this is an art form that focuses entirely on popular culture. It does this by the way of focusing on pictures of celebrities or otherwise familiar images. This done with the use of fun and colorful techniques, strongly challenges the boundary that exists between the highbrow and lowbrow in art.

Happy Tears in its simple meaning shows that the girl is happy and the tears must be from a positive sensation. She must be a celeb that has achieved what she had long watched for. Lichtenstein always focused on happy endings in most of his artworks. Most of them don’t reveal a sorrow encounter or a horrific encounter.

The artwork was to express the skills that Lichtenstein believed should have influenced other artists. It’s not clear what makes this artwork very popular and why it is fetching such a big money even years after the creation. The smile might be the main influencing factor in the high price and popularity. Most people want to know exactly what is making the girl so happy and what must have happened. You may be wondering too.

This work has commanded big sales and we can expect even higher prices in the future. Happy Tears surpassed Kiss II in 2002. The latter sold for $6.0 million in 1990. Happy Tears work was acquired at the Leo Castelli Gallery, New York in 1964 and didn’t change hands until it was sold again in 2002 at the auction at Christie’s in New York for $7,159,5004.

If you judge this artwork by its selling price, you will notice that it’s a very popular work. As a matter of fact, this work was at one point the highest valued painting of all times. Happy Tears was snatched by Lichtenstein’s other work, In The Car. This had sold in 2005 for $16.2 million. Ohhh…Alright.. (1964) created yet another record, selling for $42.6 million in November 2010. This was all topped when billionaire Steve Cohen purchased Masterpiece (1962) in June 2017 for $165 million.

Where is the work now?

Happy Tears also got some attention especially to the people in Korea. There were some claims that Hong Ra-hee, the wife of Samsung Group Chairman Lee Kun-hee, bought this artwork with money from the group’s slush fund. These claims were denounced by the group as well as the buyer. Hong Ra-hee claimed that she didn’t use the group’s money to purchase Happy Tears.

All images: The Roy Lichtenstein Foundation unless otherwise noted. 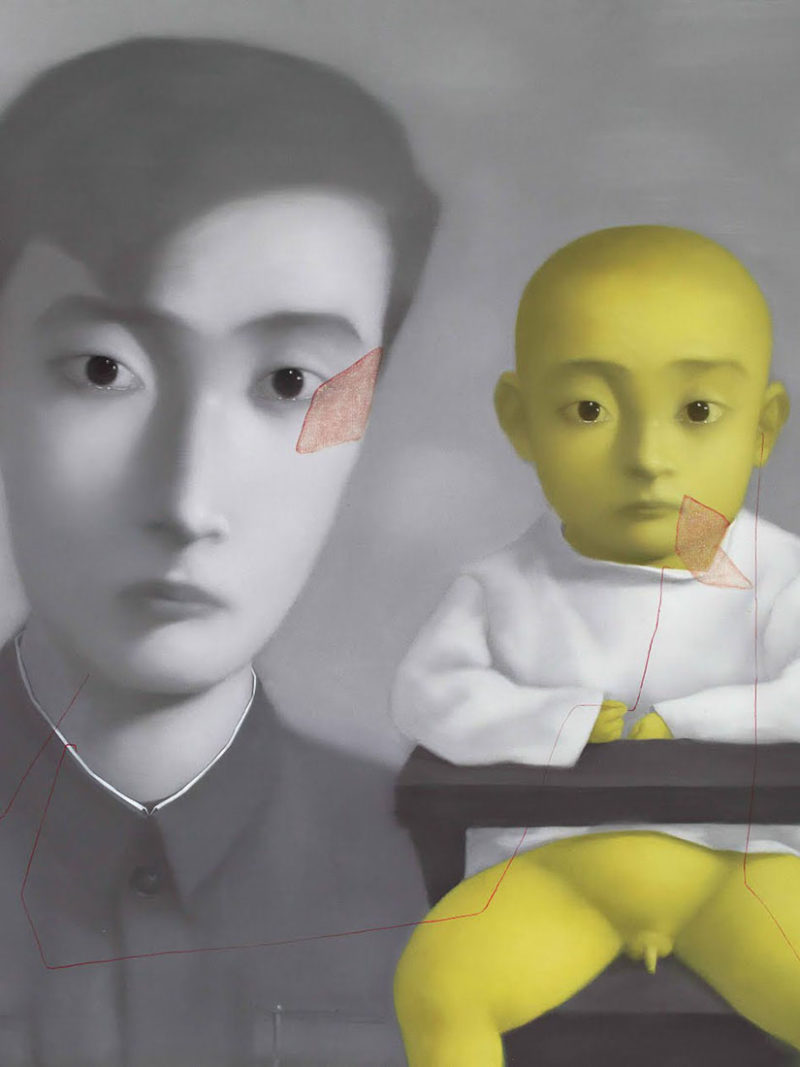 Want to support us? Want to see less ads? Be part of our fully independent operation and support us with a donation. We are a fully independent operation. One hundred percent of our editorial content is specifically commissioned. Contributions can be made with PayPal or by credit card.
Support us
Painting, 1964, everything else, Roy Lichtenstein
Click here to cancel reply.