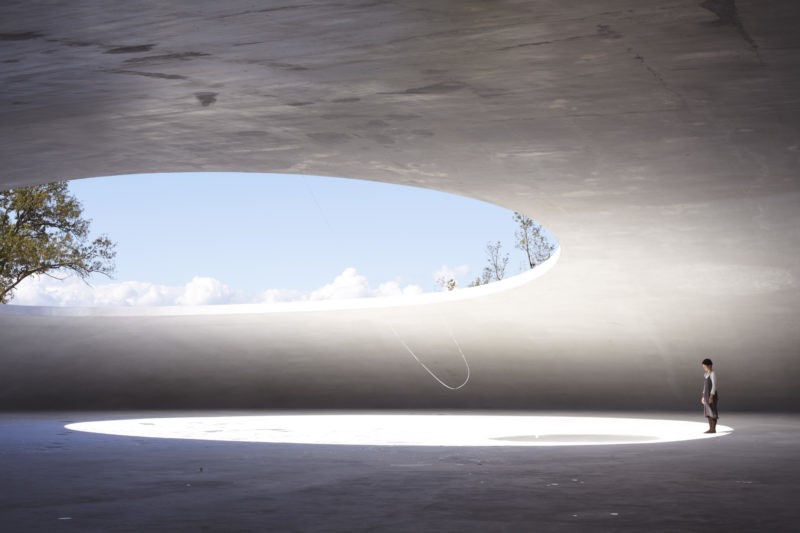 Why does the Teshima Art Museum that only hosts a single piece of work by one artist attract art lovers from all over the world? One of the main reasons is perhaps that this clever construction allows the audience a chance to not only look at the art. It lets you experience the buildings and surroundings with a multitude of senses, providing an immensely engaging, yet subtle experience.

When you enter this museum, you will be confronted instantly with the striking atmosphere that fills the structure, which reminiscent the interior of a motherly womb. The single artwork inside the museum is titled Matrix or Bokei in Japanese and was created by artists and sculptor Rei Naito, known for exploring the mysteries of existence.

The building structure of the museum is made of a freestanding concrete shell-like measuring 25 cm thick, 40 x 60 meters, and 4.5 meters at its highest point. The museum is under the Benesse Art Site Naoshima and was designed by architect Ryue Nishizawa.

The museum accommodates just a single, sublimely subtle artwork. In the interior, even the smallest amount of movement echoes. Visitors are literally banned from doing anything other than watching, walking, and sitting. 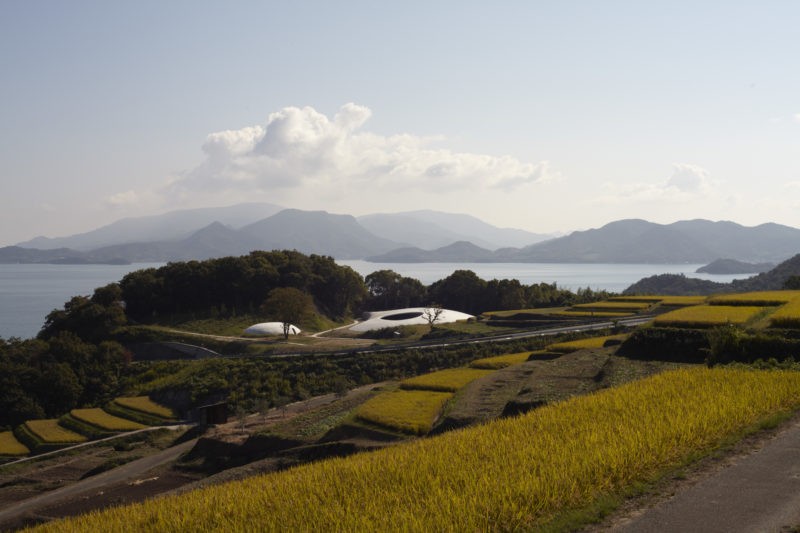 The Teshima Art Museum stands atop a hill overlooking the Seto Inland Sea and bordered by a rice terrace that was restored recently in partnership with the local community. Teshima is the second-largest island in the region, after Shodoshima. In the middle of the island is a forested hill; and three fishing villages, which are linked by a circular road. Ferry services are available in two villages on Teshima Island, namely Ieura and Karato.

The museum was built in such a way as not to interfere with the natural setting of the site, merging architecture and environment. The Teshima Art Museum is made of only a single concrete shell structure with no beams or pillars. The building appears to blend perfectly and sink into its nearby hills, just the same way the rain interacts with the earth. It resembles a droplet of water.

Teshima Art Museum is among the museums, galleries, and art projects dispersed across the islands of the rural Seto Inland Sea area of Japan, and together, they form a distinct creative bliss.

Bokei, the artwork inside the Teshima Art Museum, signifies imagery of a maternal figure giving birth to life, characterized by vapor emanating from the subterranean water that oozes up onto the surface. The casually accumulating water droplets dance across the floor of the museum as if controlled by their own volition but actually directed by the wind that enters the building via two oval holes on the ceiling.

This is reminiscent of the act of inhaling and exhaling. It also allows light as well as the sounds of nature inside the dome. The water droplets constantly change its appearance and gather to form a small spring at the center of the room. The movement of these droplets is perpetual, giving an impression of a living matter. The piece offers a lot more. It allows repeat visits since the museum is life itself, replicating a nature that continually changes, following the seasons, times, as well as the weather.

The blob was constructed with the help of specialized software. The architect Mutsuro Sasaki conducted a structural computation in a way that there would be no straight lines in the whole design. The concept was the brainchild of Kajima Corporation. During construction, soil from the location was mounded and covered with mortar. Then, twofold iron reinforcing edges for concrete were pulled together on the mound. Concrete mixers covered the mound with cement. After the building material dried, the soil got removed from inside the concrete shell.

How you feel inside of the museum

When you step inside Teshima Art Museum in Japan, instantly, everything is pure and beautiful. You are immediately removed from all the clutter, misery, and noise that remain outside the structure. Yet, walking amid tiny drops of water, you barely ever felt more at peace and more in tune with nature. The museum harmonizes architecture, art, and the richness of nature.

It is quite fascinating what can be heard inside the museum when everything is silent. If you listen keenly, aside from the sound of water emerging from the concrete floor, you could also hear birds, insects, crickets, and anything that has life within. You could also notice the sound of the sea as well as the distant sounds as if telling us that the world was following its rightful course.

The primary purpose of the Teshima Art Museum is to allow visitors to experience nature in its untainted form, through light, water, and air. Outside, the view is just as eye-catching but less confusing as the interior.

Some of the visitors who have experienced the museum and its Matrix also detailed their impressions.

It was an indescribable atmosphere. It had a tension that you couldn’t experience anywhere else except in that weather, in the stillness of the morning. There were not a lot of people. The people gathered around the water themselves seem to be a part of the water.

It was not just about looking. The time allowed me to delve into my thoughts and face my worries, I was able to think about how wonderful, precious, unique, and transformative life is. 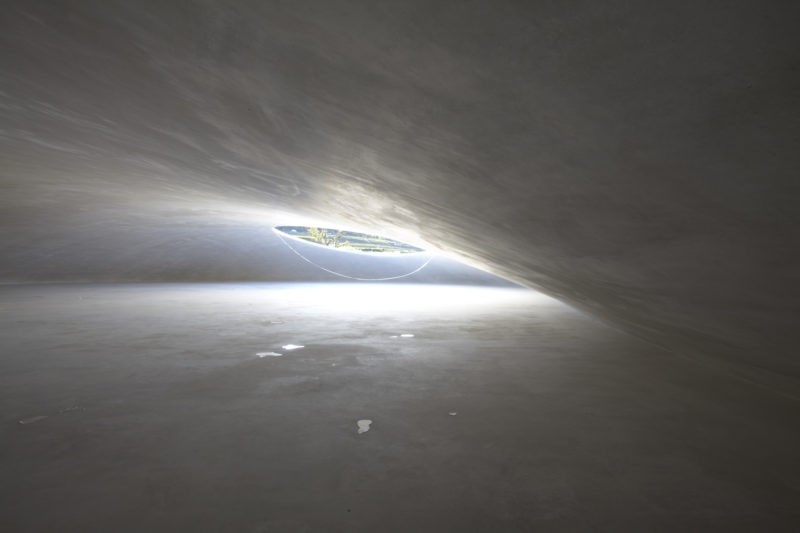 Architect Ryue Nishizawa is one of the influential creative minds to found SANAA, a Pritzker winning designing firm. He was commissioned to design the museum to house Matrix and chose to create a space that would enhance the piece of art as well as place it in a much broader context.

Speaking about the museum, Nishizawa stated,

Ryue Nishizawa has immense experience with structural engineering and proposed a structure that is purely concrete but still undulates. It was for the first time that a structure so pure had been created – structure without windows, doors, or handrails. The museum structure seems like it does not have any structural support; it appears like it was just made like a form in nature. The tiny undulating bumps formed by the concrete are the ones responsible for making the water drop installations run free, which you can see glide along the slanting surface of the shell. The single installation is highly engaging, which is the main point of the Teshima Art Museum.

A perfect museum might not be about how breathtaking its collection is, or how many epic exhibitions it stages every year. Using the Teshima Art Museum as an example, an excellent museum should provide an experience that leads the viewer to discover unknown territories, bringing the audience into profound contact with the environment.

The fact that the building is made of pure concrete is something worth noting. It may mean pure simplicity, although, in contemporary art, concrete does not seem like the best material to achieve simplicity, yet Ryue Nishizawa managed to design the structure, creating curves in concrete.

While exploring the structure and its installation, you will realize the relationship between art, nature, and architecture. When creating a site like this, architects tend to overlook the relationship it has to the environment.

Ryue Nishizawa managed to blend the surroundings, the breathtaking growing rice fields as well as the winding of the terrain, into the project by incorporating the openings and light into it. Inside the shell, the viewer can feel the movement of the wind inside the structure and witness every single sound. It is a fascinating experience that brings all the senses and awareness to play. 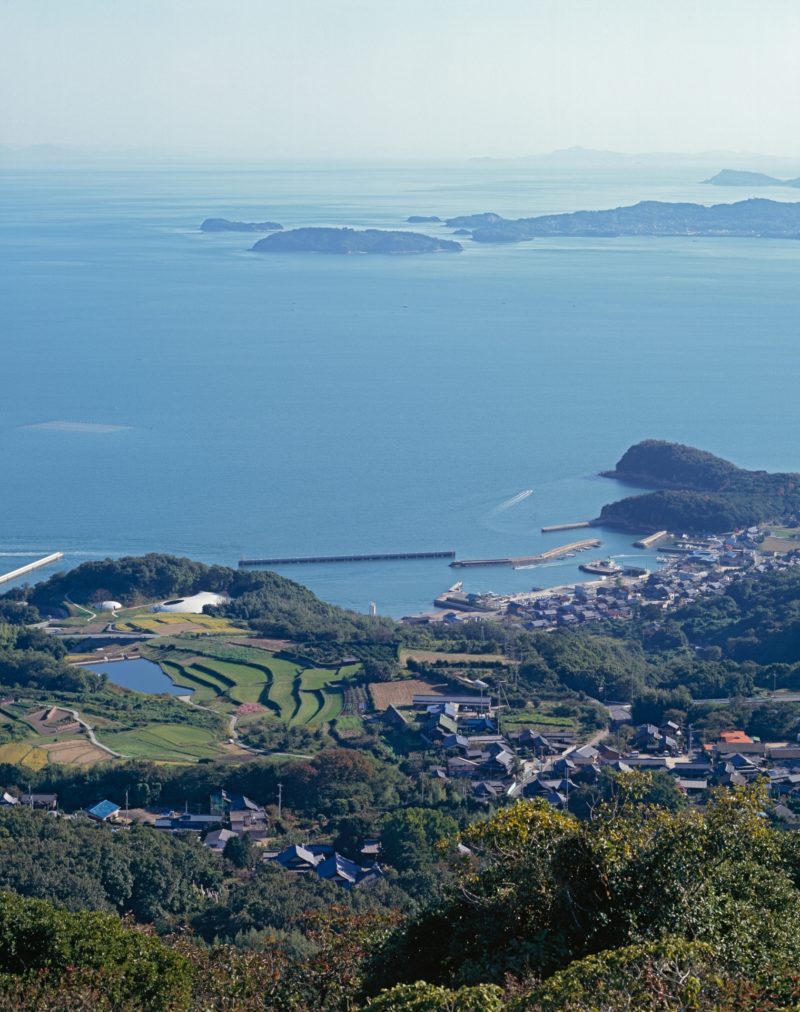 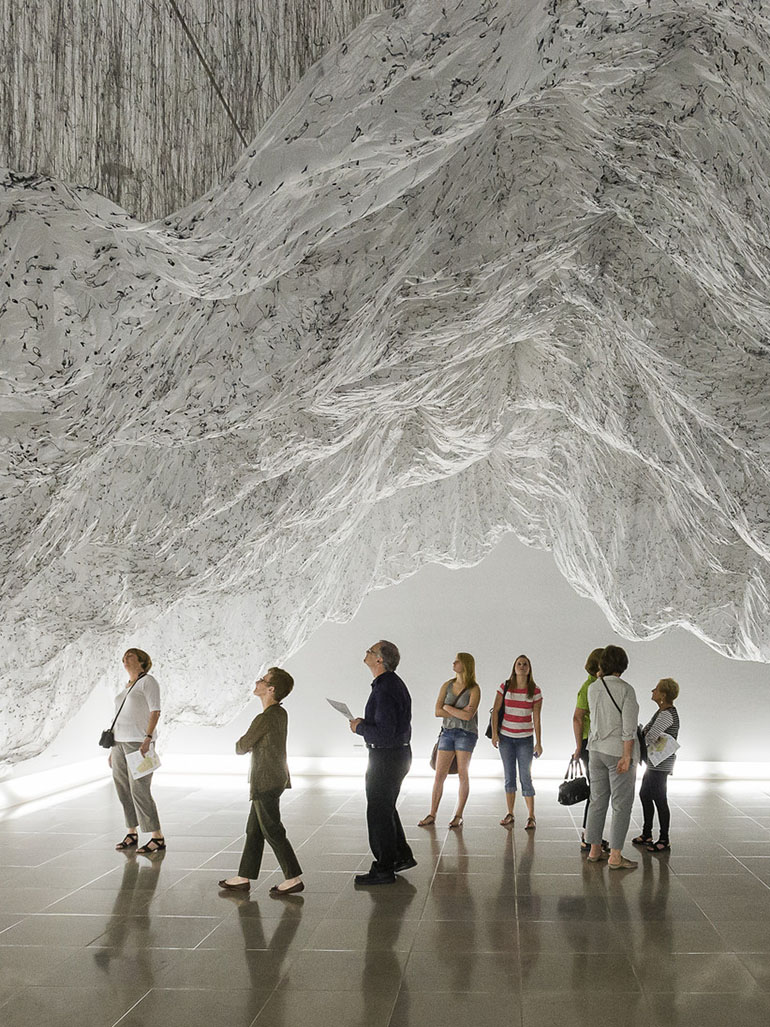 These are some of Yasuaki Onishi’s most impressive works 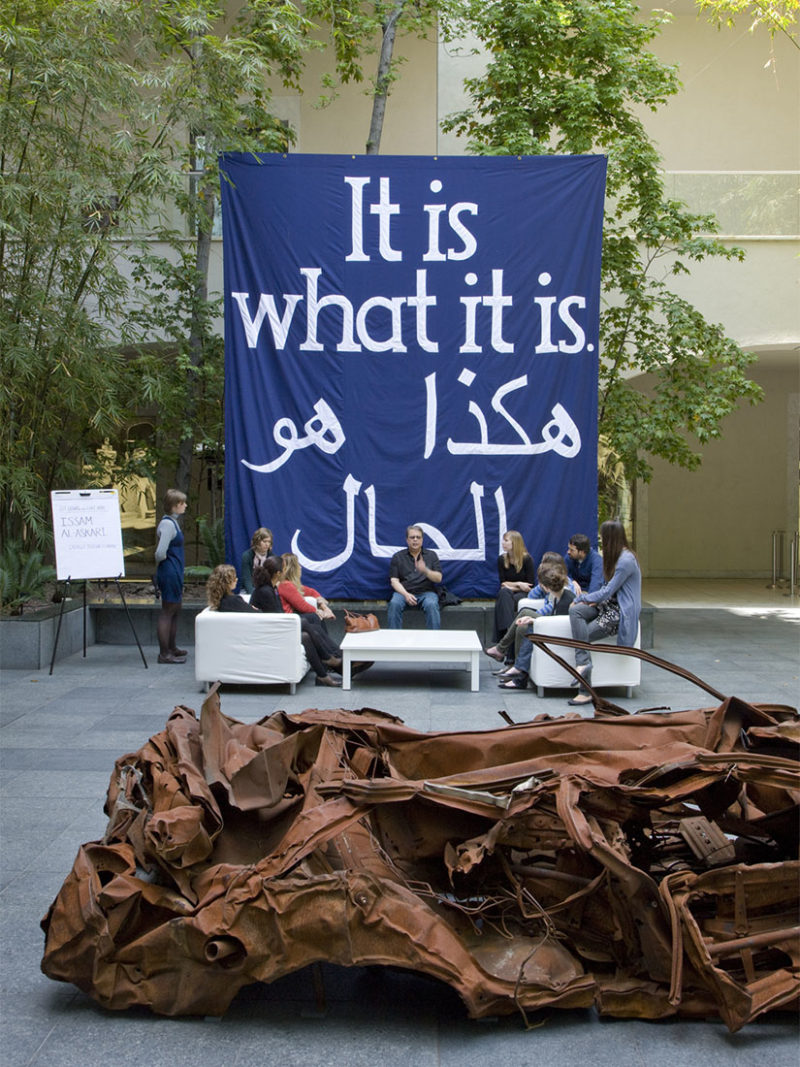 Why did Jeremy Deller bring an Iraqi suicide car bomb into museums? 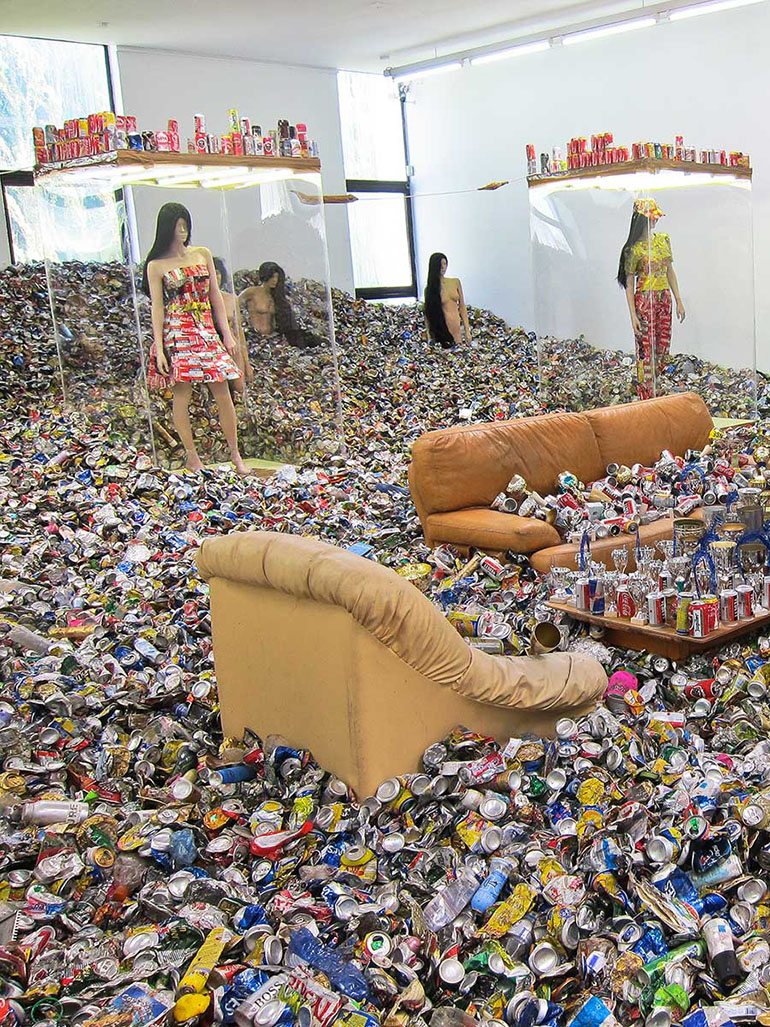