Jeff Koons is a quintessential neo-pop artist. Therefore, it is not surprising to find artworks made by this legendary contemporary artist fashioned from random trinkets that you would find at a neighborhood yard sale. The components used to create his pieces may not be considered fine art or sophisticated by any means.

“Art has this ability to allow you to connect back through history in the same way that biology does. I’m always looking for source material.” – Jeff Koons

However, the result is an ingenious transformation that has caused immense commercial success for Koons. His artwork is definitely a fine hybrid of fine art and popular culture. Anyone that analyses his pieces, such as Koon’s The New, will see that his work speaks volumes about the contemporary society that we live in today.

Born in Pennsylvania, Jeff Koons was heavily inspired by Salvador Dali’s works at a young age. But it wasn’t until he encountered the pop art movement and Andy Warhol’s work that his artistic direction begun to take on a neo-pop approach. Regarded as both a technologist and an artist in the same breadth, Koon is credited with coming up with unique fabrication techniques that have inspired other artists all over the globe.

Between 1979 and 1980, Jeff Koon primarily worked on The New series. His works at the beginning were based on conceptual structures. The New was created in 1980 after completing his first conceptual sculpture series which he titled Pre-New. The New featured a series of vacuum cleaners from popular brand names that appealed to Koons.

How Koons created the work

In the New, Koon stacked two unused vacuum cleaners on top of each other and sealed them hermetically in a well-lit Plexiglas box. The lighting of the fluorescent bulbs in the display window is what caused the art installation to appear like a typical display that you would find in an appliance store rather than a high-end piece of art that you would expect to find in a gallery. Perhaps the stand out feature of each artwork in “The New” series was the use of fluorescent lighting. This gave them some sort of gleaming appeal that attracted fans from the right, left, and center.

Where & how did he show this work?

Koons first exhibited The New at the New Museum in New York in 1980. He opted to use only a limited combination of different vacuums. At the gallery space, Koons had arranged the vacuums vertically and displayed them as if they were in a showroom, with just the simple words the New brandished across the display.

The first in Jeff Koons’ Hoover series is a system of wall-mounted Vacuum cleaners encased in plexiglass vitrines at The Whitney Museum of American Art, New York. According to him, the vacuum cleaner is one of the most ubiquitous household equipment in American households and displays both “male and female sexuality tendencies.” From 1981 to 1987, Koons continued to create several different configurations using banal or ready-made elements, and the resulting artworks were quite a sight. This body of work, collectively known as “The New,” played a huge role in the rise of Jeff Koons to fame. They all explored the way our desires and fantasies are manifested in everyday objects.

With this work, Koon’s use of the vacuum cleaner has a considerable significance. Through this series, he explores society’s commercialization of new appliances and commodities. Basically, he was mocking society for its fascination with new things. He also commented on the relationship between human beings and their commodities and how these commodities impact human behavior, thoughts, and sexuality. 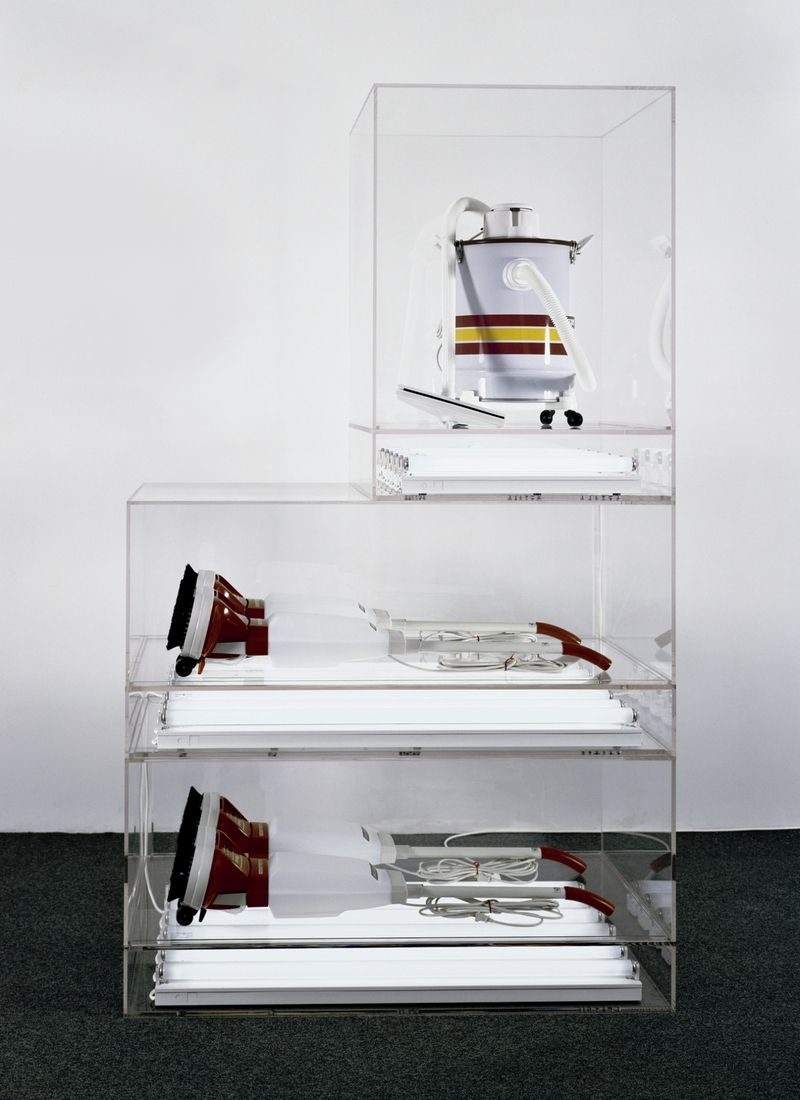