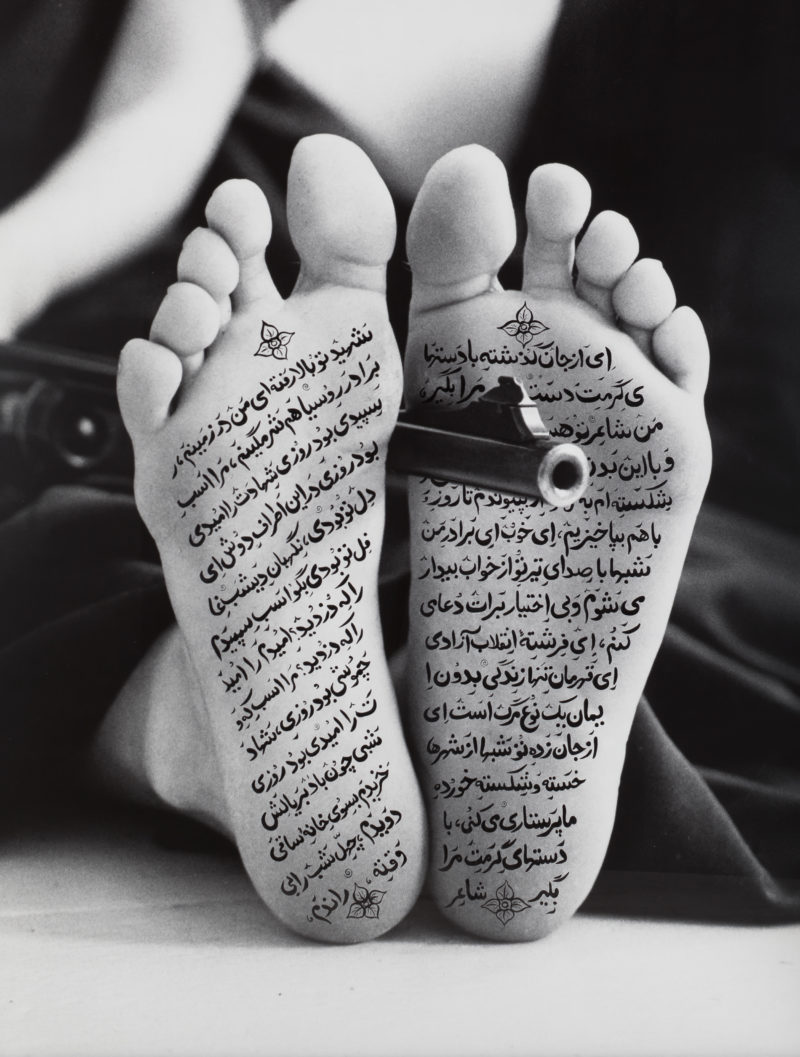 Through the course of her very illustrious career, internationally celebrated artist Shirin Neshat has covered an array of themes in film, video, and photography. Her works cover several themes including politics in Muslim nations, issued of gender equity and disparity, identity, as well as the link between the personal and the political. As a result, she has won several awards for her works including the respected Silver Lion award at the Venice Film Festival for her work in the film Women without Men, which was created in 2009.

Shirin Neshat was born in a small city in Iran that was situated almost two hours away from Tehran. At 17, she moved to the United States to complete her schooling but would not return to her home country for almost 20 years thanks to the Islamic Revolution1 that started in 1979.

Her earliest works featured photographic pieces and series that explored the notions of femininity in regards to the Islamic fundamentalism and combativeness that she had once herself experienced in her home country of Iran. Subsequently, she proceeded to work on video installations which departed from being overtly political to become more narrative-like and include poetic imagery. 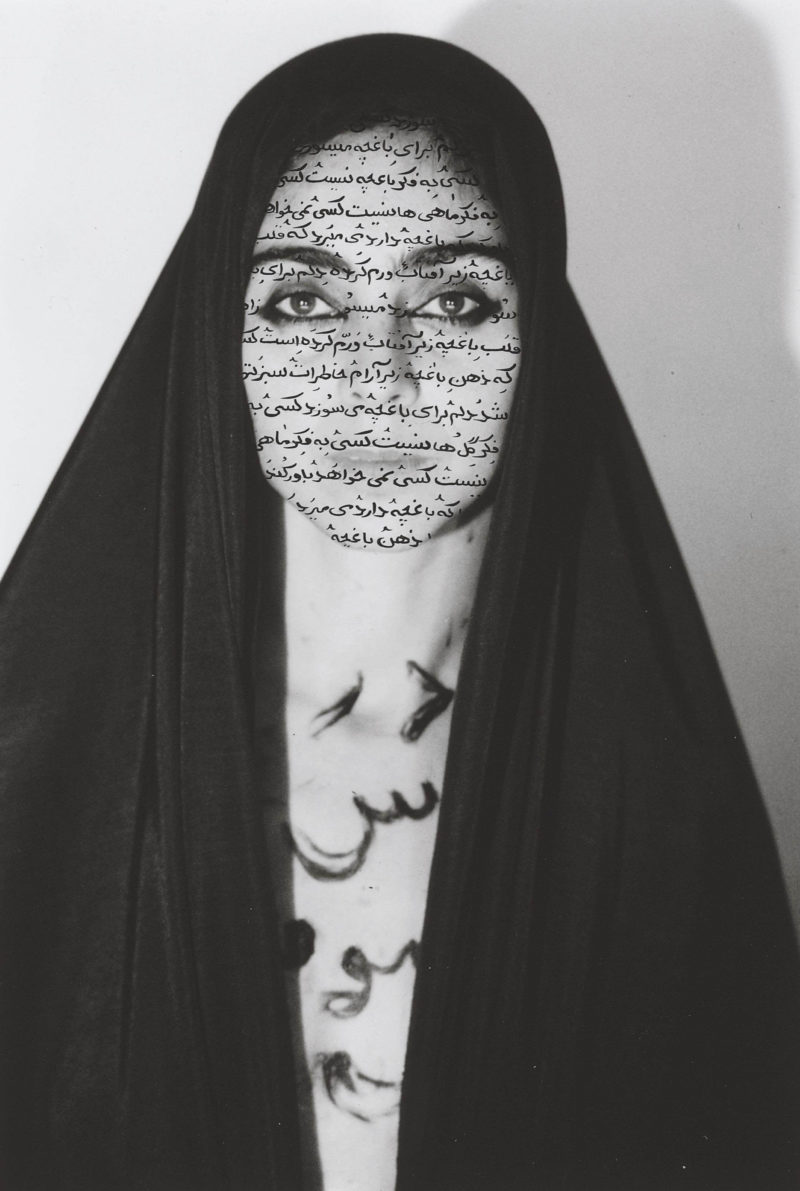 Shirin Neshat – Unveiling from the series Women of Allah, 1993 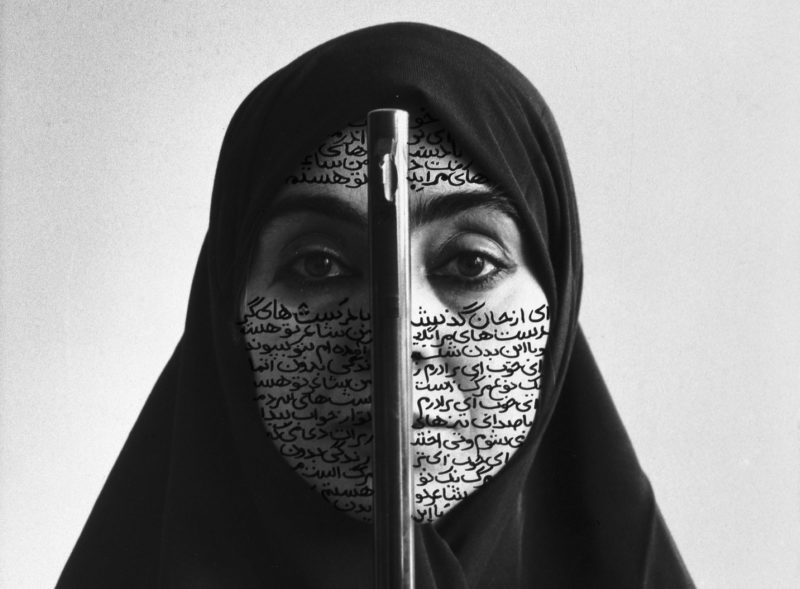 What had changed when Neshat return to Iran

Upon her return to Iran, her involvement in the art scene intensified because of what she was exposed to upon her return. As expected, owing to the war, things had completely transformed; men seemed to have complete control over the women and cosmopolitan women that dressed as they pleased during her youth no longer existed.

During this time, Neshat processed her complex feelings and transformed them into a series of arresting and commanding, staged photos that displayed women holding guns and some in chadors. Although Neshat was not the photographer herself, she conceptualized, appeared and directed the series that would come to be known as the Women of Allah series. The series was developed to explore the dichotomy between feminism, violence, religion, and politics.

The photographic series titled Women of Allah, which also included Speechless consisted of a series of black and white images of chador-dressed women, including images of the artist herself. The black and white images were covered primarily in black text and frequently focused on various body parts such as the eyes, face, hands, and feet. In some scenarios, the models would gaze directly at the audience, posing with a rifle in a provocative way, while nonetheless dressed in full Islamic garb. 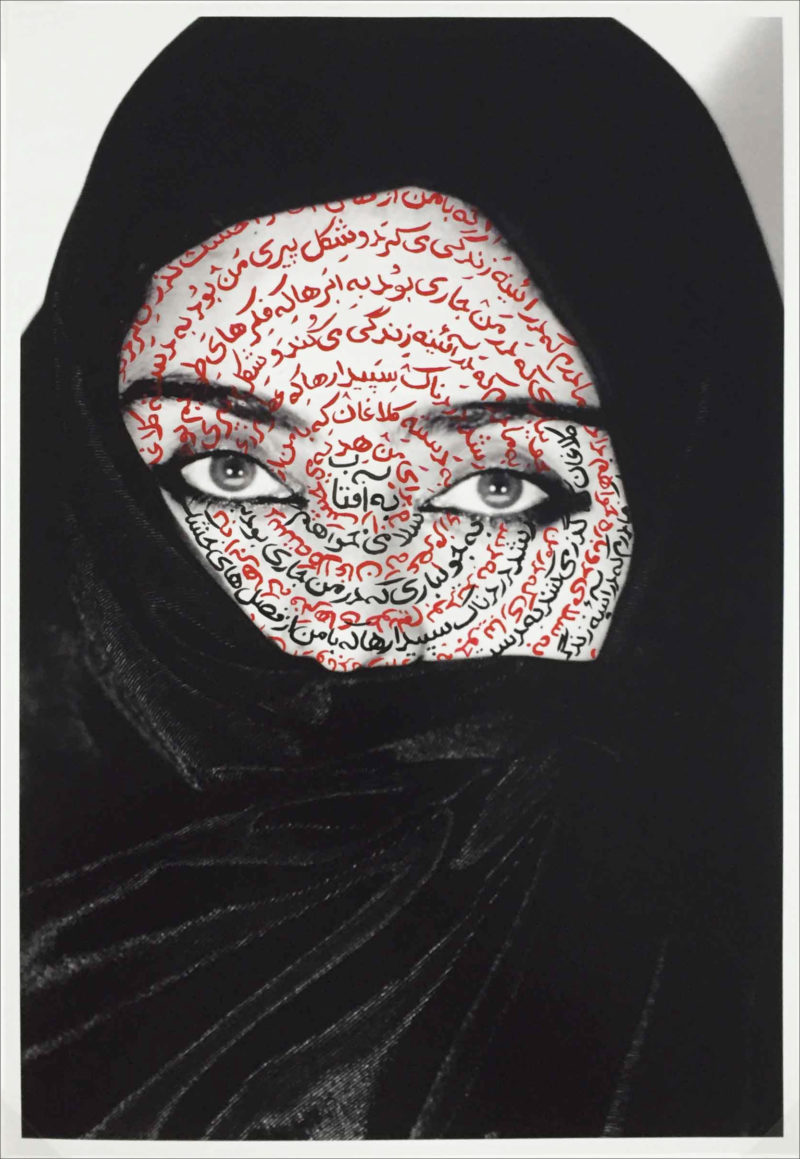 Shirin Neshat – I am It’s Secret, from the series Women of Allah, 1999 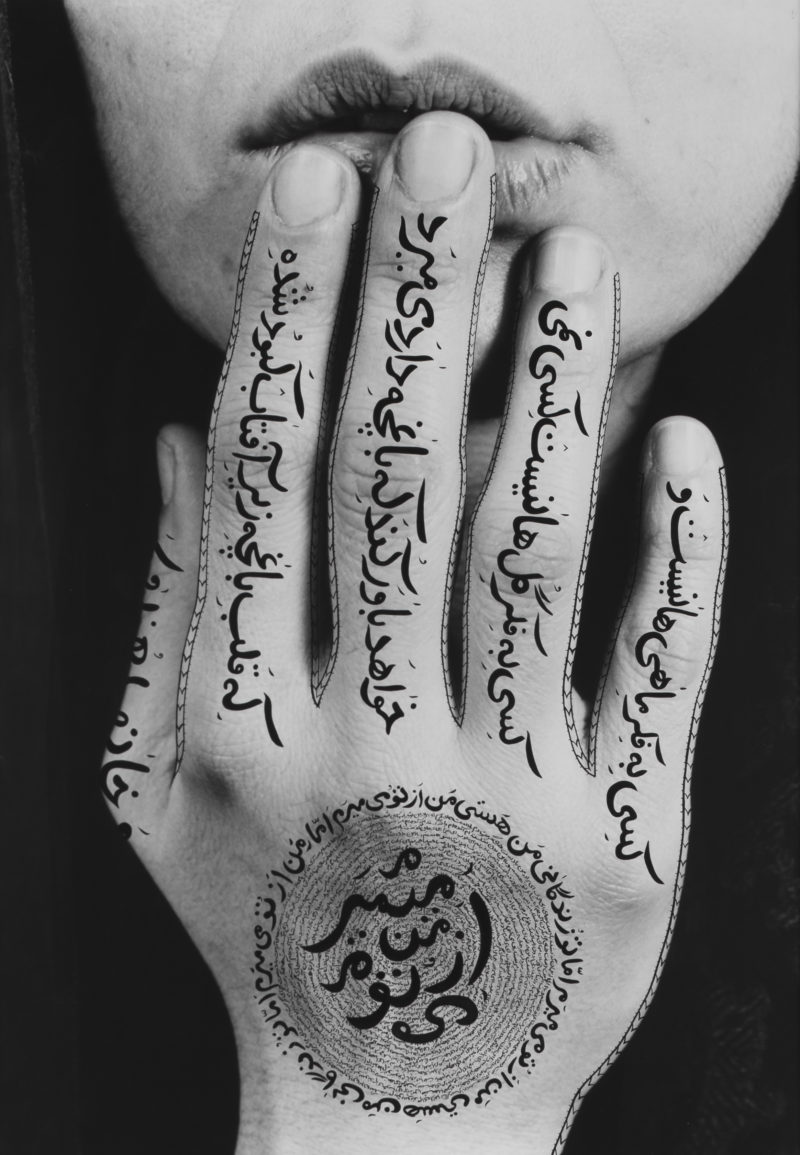 Shirin Neshat – Untitled, from the series Women of Allah, 1996 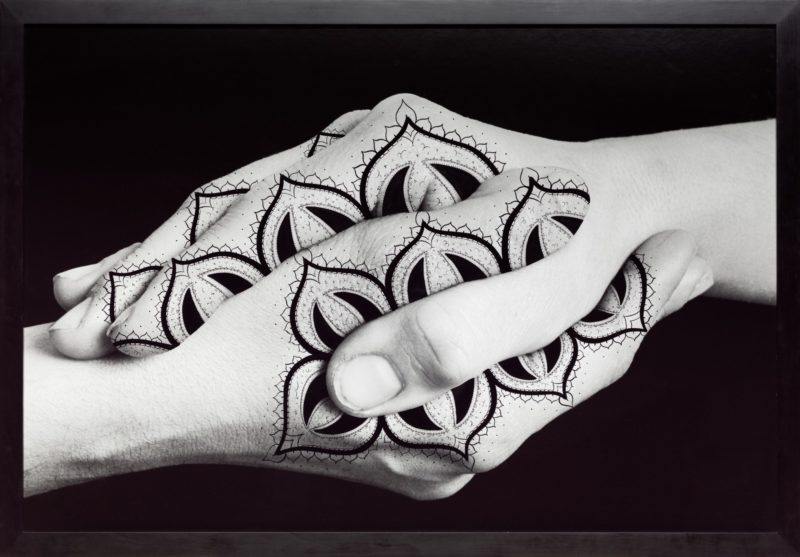 Shirin Neshat – Untitled, from the series Women of Allah, 1996

Though made up of a range of photos, Speechless was the most evocative image included in the series. The print featured the right side of an unknown woman’s face as well as the barrel of a gun that seemed to emerge and reflect like a shiny earring. The image of the woman appears calm. Every area of her face, except for her eyes, was covered with a series of Persian writings and text which appeared across the image. Inscribed across the surface were the words from a poem written by Tahereh Saffarzadeh2.

Shirin Neshat – Speechless, from the series Women of Allah, 1996

In the Women of Allah series, Neshat concentrated on four primary symbolic components namely, the gaze of the women, the text across the images, the veil and the weapons used. She used these images to be ambiguous in a manner that would contradict the western notion of Muslim women that is often diminished by the veil. Although the women in the series may appear to be disempowered by their religion, the women in the Women of Allah series appeared strong, powerful and heroic despite having faced years of political and social persecution. The weapons and the text inscribed on the women’s bodies allow them subjects of the art to speak even though they have been forced and will probably be forced to remain silent thanks to the domineering laws.

When Neshat uses herself as the model in Speechless, she also casts a feeling of power and respect. By allowing the camera to become zoomed up close to her face, she gave off a feeling of power, which was quite different from what the world expects from a Muslim woman. Through the different facial expressions of the women, it is clear that each one is desperate for freedom not just to live in the manner they wish, but the freedom to also express themselves.

By placing the text on the women’s faces, the body part that is most easily identifiable, it serves as a reminder of the power that religion has over women and other marginalized sects in society and the oppression it has towards self-expression. Though quite simple in its approach, Speechless was actually highly complex and metaphorical. By focusing on the solemn appearance of the women’s faces, Speechless was made even more powerful by highlighting the range of emotions that consist of strength and weakness, freedom and oppression, determination and submission, as well as hope and despair. 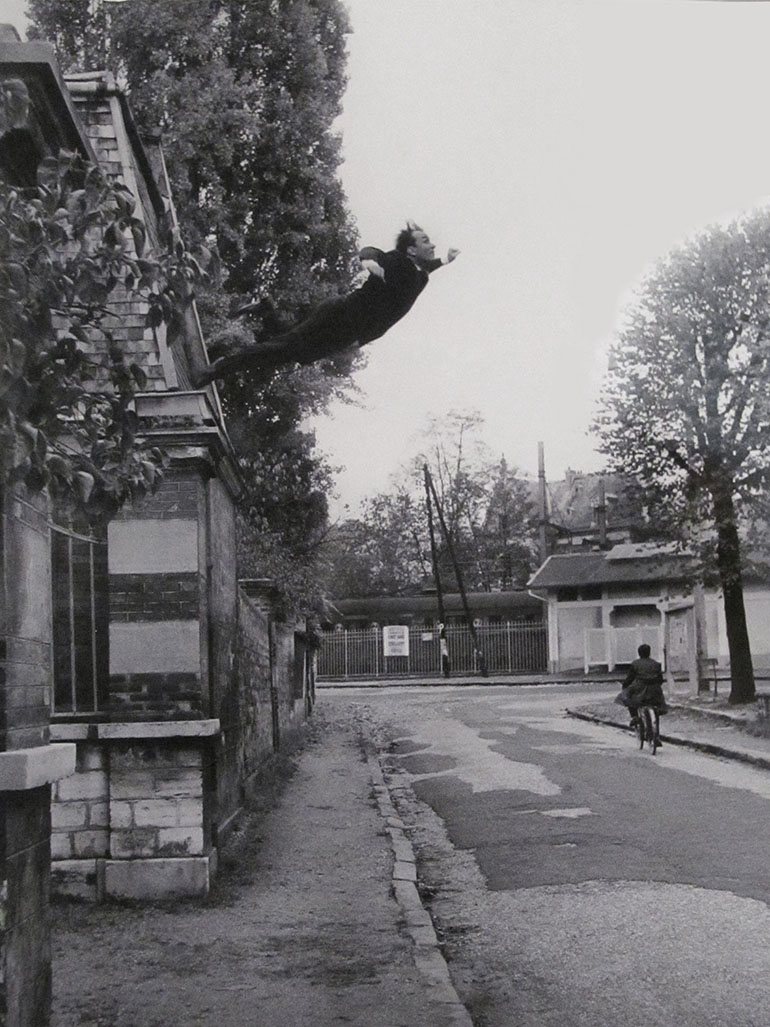 Why did Yves Klein take a Leap into the Void? 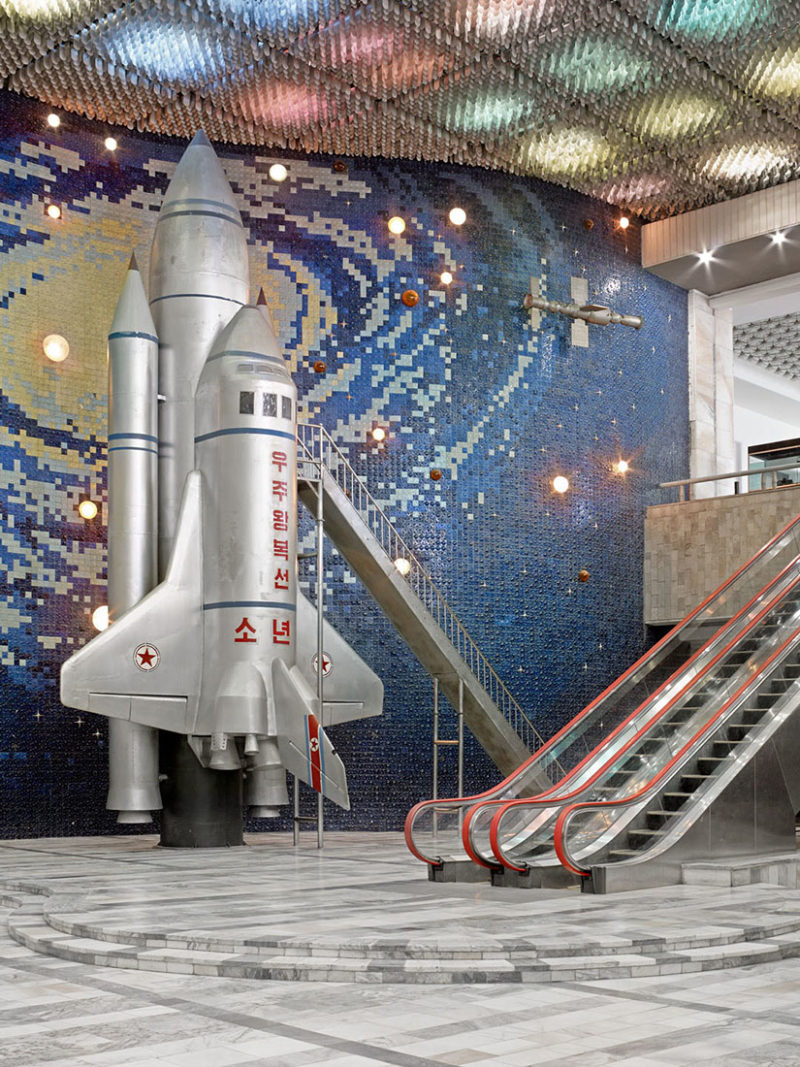 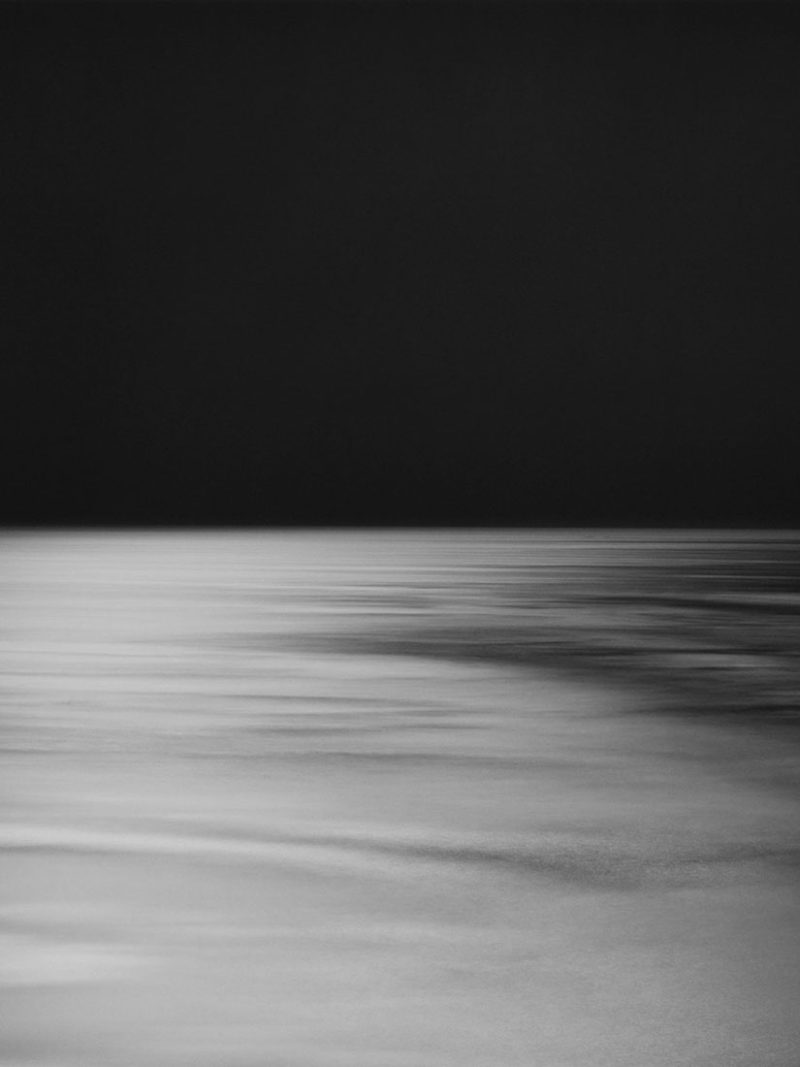