Ai Weiwei emerged as a revolutionary artist on the scene of Chinese art and culture. He served as a protagonist in various dynamic avant-garde movements. His controversial exhibitions have taken the world of art by storm. He has been represented on top in the list of 100 most powerful people1 who belong to the world of art. One of his most talked about artistic installations has been the Sunflower Seeds at the Tate Modern Turbine Hall, London.

The Sunflower Seeds installation at a glance

Ai Weiwei covered the entire floor of the Tate Modern Turbine Hall2 in London with over 100 million replica sunflower seeds. Each of these seeds was individually handcrafted by the artisans. The installation was commissioned as a part of the Unilever Series. Visitors were invited to walk over the long stretch of porcelain sunflower seeds covering almost 1000 square meters area of the hall. Each of the seeds was uniquely molded, individually fired at 1300c, precisely hand-painted and further fired again at 800c for utmost perfection in the city of Jingdezhen. The city is primarily famous for the production of Imperial porcelain3. The production continued for more than two years producing more than 100 million seeds weighing over 150 metric tons that can cover 1000 square meters area of the Turbine Hall.

The vast installation was admired by critics and art lovers alike. The flat landscape of the porcelain sunflower seed husks covered the entire stretch of the eastern end in the Turbine Hall. Visitors walking across the surface were overwhelmed to discover 100 million seeds individually real-like hand-crafted porcelain seeds specially produced for the event. This installation has been the largest artwork of porcelain and was also amongst his most prized exports. Although the seeds appeared identical from a distance, each of them was different. They were products of hours of hard work and intricate craftsmanship by skilled artisans. For their perfection and accuracy, they were far from being attributed as an industrially made product.

Video interview with Ai Weiwei & behind the scenes footage

In this video Ai Weiwei gives insight into the background and production process of one of the most spectacular exhibitions of 2010, Sunflower Seeds at Tate Modern. Follow the artist to the city of Jingdezhen in northern Jiangxi, China, where all of the sunflower seeds have been individually hand-sculpted and hand-painted. The installation in London is made out of millions (five tons) of hand-painted porcelain sunflower seeds. Each actual-size seed is unique and intricately hand-formed and like those shown at Tate Modern painted in Jingdezhen.

Insights about the ‘Seeds Of Hope’

Attributed as the ‘Seeds of Hope’, the installation was both sensory and immersive. Visitors were allowed to touch the seeds, walk on them and listen to the sound as the seeds shift under their feet.

The sunflower, following the sun, is also a well-known metaphor for The People during China’s Cultural Revolution. The seeds provided nourishment at all levels of society, and the ubiquitous discarded husks provided evidence of an individual’s existence. Ai Weiwei created a deceptively unified field with a large number of individual seeds. Sunflower Seeds comments on social, political and economical issues relevant to contemporary China such as the role of the individual in relationship to the collective.

The tactile and engaging nature of the seeds raises many pertinent questions about the world around us. How do we contribute as an individual to our society? Do we need to act together to stay strong, significant and powerful? Are we heading towards a promising future with our increasing desires and materialistic outlook? Ai Weiwei always believed that an individual must set an example for the society to follow. Only ones own behavior and acts can define one’s individual self and the society around.

Through the presentation, Ai Weiwei tried to comprehend our perception about the number, individual value, and our engagement with society. It was attributed to being a spectacular commission in the Tate Modern Turbine Hall exhibited over the past decade. Ai Weiwei’s imagination and thoughtfulness exhibited through his work.

Deciphering the ‘Seeds Of Hope’

Ai Weiwei has always been creating appreciable social sculptures employing diverse media, vibrant techniques, immense dexterity, humor, and wit. Most of them are a representation of contemporary Chinese society. The Sunflower Seeds installation represents a glimpse of the relationship between an individual and society. Ai Weiwei usually presents a poetic yet provocative statement that audaciously and intelligently subverts the tradition encouraging the reform.

Like his other works, Sunflower Seeds reflected matters concerning the society, economy, and politics in China. It reflects mass production and globalization in China. It represents the growth of western consumerism. It represents thousands of low-priced labors constituting the bottom of the production process. It represents the tedious procedures, thousands of manhours, and numerous assembly lines installed in gigantic factories. Absurdly, the Sunflower Seeds installation provides an ironic reflection of the modern social reality of China.

When the world was witnessing the expansion of China as an industrialized nation supplying a myriad of domestic goods to the entire world, the Sunflower Seed installation restored Chinas identity as the prime manufacturer of prized ceramic products. Many of these prized products have created a culture of consumerism in various other nations. The Chinese population has become a workforce mechanically producing goods for a commercial global market. Furthermore, the mass production of goods ranges from clothes to electronics.

Since its first appearance in the Tate Modern Turbine Hall, the Sunflower Seeds installation has appeared in other exhibitions in ever-changing forms. It was presented as the heap of grain at the Magasin 3, the Carpet at the Centro Andaluz de Arte Contemporáneo and the grey beach at the Tate Modern. The exhibit of the Sunflower Seeds at the Tate Modern Turbine Hall was most significant in terms of weight and amount in the year 2010 where 100 million porcelain seeds weighing over 150 tons covered a stretch of 1,000-square-metre to a layer depth of 10cm. The work literally amalgamated an epic sense of magnificence with exquisite craftsmanship.

The manufacturing process of the Sunflower Seeds

Ai Weiwei appointed over 1,600 artisans in the city of Jingdezhen for two and a half years to create his huge pile of ceramic seeds. The sunflower husks were manufactured from the kaolin extracted from the local mountains. The creation of every unique seed followed a conspicuous 30-step procedure of molding, crafting, and hand-painting. The seeds were forged under 1,300 degrees. The production has been attributed to be the most costly artwork in Chinese and Western culture.

The sunflower seeds are a common Chinese street snack closely related to the life of the artist. For him, different layers of the seeds embody multiple meanings. The simple yet intriguing layers evoke memories of hardships and hunger from his childhood during the Cultural Revolution. Ai Weiwei considered the Sunflower Seeds installation as a composition of 100 million individual pieces of art. Every unique seed despite being a singular tiny sculpture submerged in a pool of hundred million seeds had a unique identity with its subtle nuances. It represented an individual worker amongst the group of 1,600 who performed repetitive duties in Jingdezhen to create the masterpiece. It represented an individual in the crowd of 1.3 billion Chinese representing the digital era.

Ai Weiwei tried to trigger a Domino effect through the Sunflower Seed installation magnifying the extensive and complicated process by 100-million-times. He devoted innumerable hours and energy with unimaginable patience to unveil the significance of an individual, as well as the imposing strength created when the individuals gather together. The manufacturing process of the sunflower seeds can be viewed in the well-documented video above in which the artist is seen moving through the archaic mills, generously instructing the workforce in Jingdezhen.

The Sunflower Seed installation reminded people of how China is gradually becoming the world’s second-largest economy. It reminded people of the large labor force backing the huge production of goods. Next, it induces a sense of enigma through the layers of artwork fueling the perception that whatever you see is not exactly how you see it. Initially, every visitor assumed to see natural Sunflower seeds. The magnificence and scale of the seeds fueled the perception that they are made in large quantity on a production line in a factory which again proved false. Their reality instilled a sense of magnificence and astonishment.

Finally, a subtle examination of the installation transcends certain social and political matters where people can see themselves as part of a bigger picture. While the western perception was fueling the idea of an individual fragment, Ai Weiwei’s installation made people contemplate upon themselves as part of a society. In Weiwei’s installation, every seed contributed to creating a magnificent masterpiece. It made people perceive they as the smallest identity participating to create something more significant be it society, environment or workforce. Ai Weiwei’s Sunflower Seed installation that started as a sensory experience for the visitors still holds equally impressive till date and continues to amplify the important questions raised by the artwork.

Ai Weiwei – Kui Hua Zi (Sunflower Seeds), one ton of handmade porcelain sunflower seeds, dimensions variable, executed in 2008, this work was conceived prior to the commission by Tate Modern in 2010. A series of ten unique works with one artist’s proof now exist, each accompanied by a certificate signed by the artist.

About the venue: Tate Modern

Even before the sunflower seeds project, the Tate Modern in London was an impressive place for the public. It attracted international visitors from around the world for the annual Unilever Commission Programs for projects such as Carsten Höller’s slide in 2006 and Olafur Eliasson’s ambitious project of recreating the sun within a museum in 2003. Turbine Hall, formerly the Bankside power station, became the chosen home of the sunflower seeds replicas.

The Turbine Hall in Tate Modern has 1,000 square meters of floor space. It is here that famous outdoor sculptures stood with some going up to 150 meters in height. There has always been variety. However, none of the artworks were as stunning and unique as Weiwei’s idea.

Born in Beijing in the year 1957, Ai Weiwei has exhibited impressive artworks in the national and international terra firma. Along with his solo exhibits, he has also contributed to many international group exhibitions. He is the founder of the design company named Fake Design. He co-founded the renowned China Art Archives and Warehouse based in Beijing. His artwork has formed a part of many major collections. The Unilever Series that started in Tate Modern Turbine Hall in 2000 continued till 2012 inspiring more than 24 million visitors to the Turbine Hall serving as an inspirational and thought-provoking work of art.

Ai Weiwei with his Sunflower Seeds

Other important works by Ai Weiwei

Why you should explore Andy Goldsworthy’s Wood line 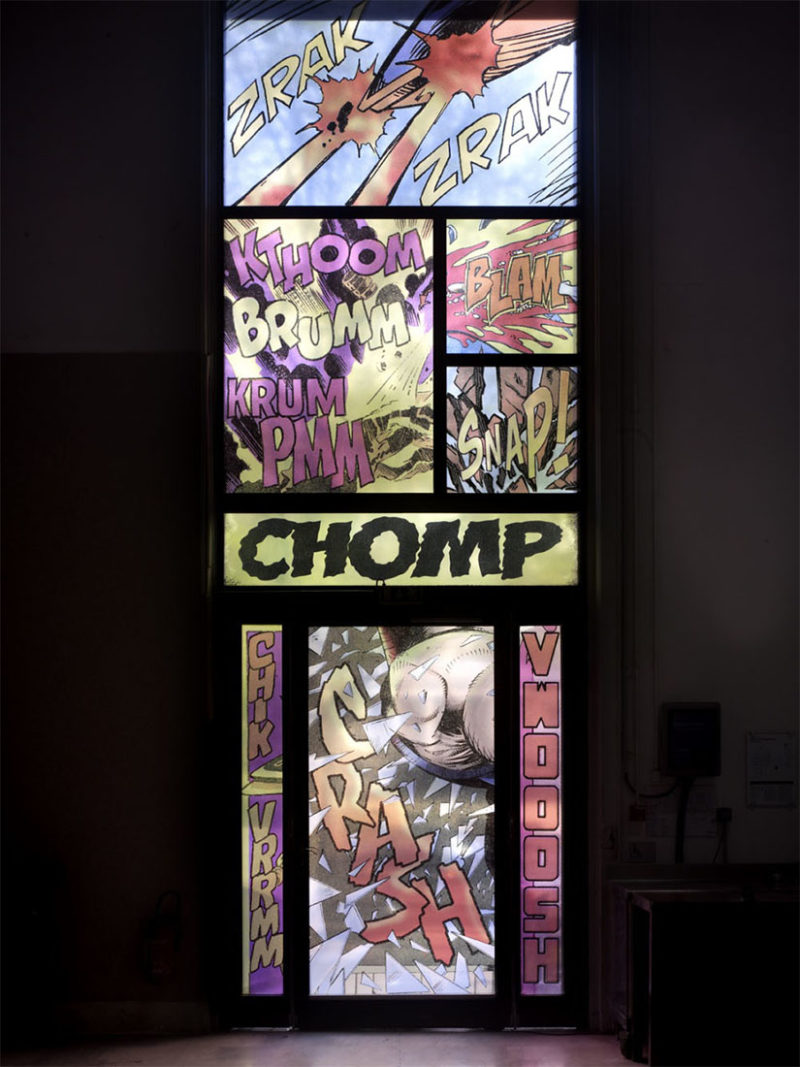 Why did Michael Lin install a complete house on a roof in Shanghai?

Want to support us? Want to see less ads? Be part of our fully independent operation and support us with a donation. We are a fully independent operation. One hundred percent of our editorial content is specifically commissioned. Contributions can be made with PayPal or by credit card.
Support us
Installation, 2010, 2012, activism/social justice, Ai Weiwei, Art in London, Art in New York, conceptual art, exhibition, Mary Boone Gallery, sculpture, Tate Modern, Turbine Hall, video