Ai Weiwei has never held back in terms of the amount of experimentation he’s willing to involve in his art. He has attracted much attention in not only China but also the rest of the world for being a controversial artist.

His work A Ton of Tea (2007) is easy to understand as the name suggests without losing its profoundness. It is rich in meaning despite all its simplicity.

A Ton of Tea

Ordinarily, any contemporary artist would have a theme. That’s the same with Ai Weiwei’s A Ton of Tea’. However, the piece isn’t as abstract as much of the work we see from other artists. After all, A Ton of Tea is precisely what the name suggests. It’s the result of Weiwei compressing one ton of tea and fitting it all into a cubic meter. Despite all that simplicity, it also carries several meanings, as we will see below.

A Ton of Tea hints at the minimalism that Ai Weiwei wishes to address through his work. Some of the artists that Weiwei admired were great believers in minimalism. Alternatively, you could say that they hinged their work on minimalist behavior and trends. The artists are Robert Morris and Donald Judd. Even though you would expect Weiwei’s inspirations to be mostly from China, the fact that he admired westerners hints at the openness of his thinking.

The minimalism applied here is a deliberate attempt on the part of Weiwei. Here, he’s essentially saying that he doesn’t want to take the attention away from the compressed ton of tea. He wants all your focus to be on the subject. As an extreme form of abstract art, minimalism developed in the United States in the 1960s. It’s all based on simple, everyday geometrical shapes’ namely, squares and rectangles.

Additionally, A Ton of Tea involves the compression of Pu’er tea, which is the traditional tea drunk all over China for hundreds of years. Based on this, you would be justified in stating that Weiwei created the sort of work that highlights the culture of his people.

China consumes roughly 1.6 billion pounds of tea each year and ranks quite highly in terms of countries that drink the most amount of tea. Globally, tea is the world’s top drink. Therefore, by creating A Ton of Tea, Weiwei is already using a theme that billions of people around the world can already identify with easily.

His subject is the sort that’s likely to intrigue a Chinese just as much as it does a European, Asian, or African. In A Ton of Tea, Weiwei has dried the tealeaves before compressing them into what we see through this piece of art. 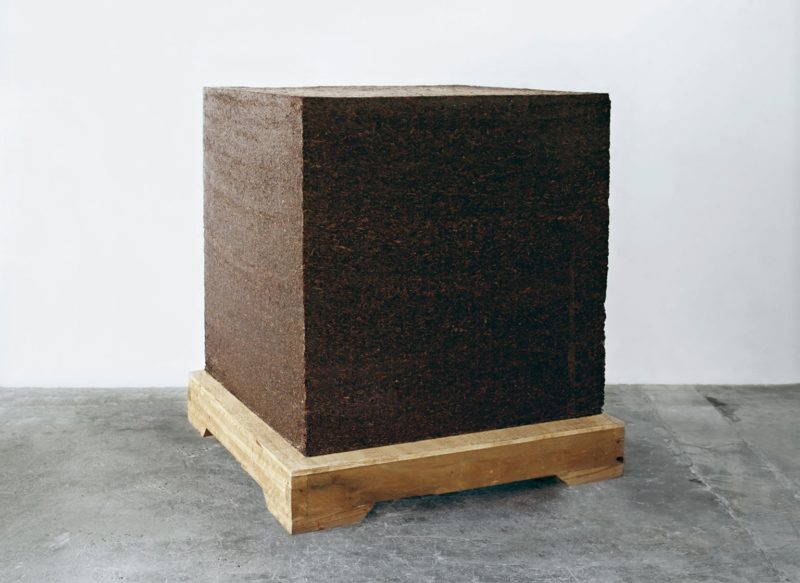 What does this work mean?

As in many of other of Ai Weiwei’s work, he refers to historical events and the culture of china. As outlined above, tea has played an enormous role in the global world of the past hundred years. Most famously, it caused the Boston Tea Party revolt of 1773, opposing the British Parliament’s tax on tea. Pu’er tea especially is considered a highly-priced commodity, being the world’s most valuable tea, sometimes being traded for as much as $500 a gram. Tea in the context of this artwork and the exhibition in the UK can also be seen as a symbol for the complicated relationship of Britain’s Empire with China, which resulted in two Opium Wars. The history of Bristol’s Harbour goes back to the 13th century.

Li Hongbo’s stunning flexible sculptures are not what they seem

What made Richard Serra’s Tilted Arc sculpture so controversial?

Want to support us? Want to see less ads? Be part of our fully independent operation and support us with a donation. We are a fully independent operation. One hundred percent of our editorial content is specifically commissioned. Contributions can be made with PayPal or by credit card.
Support us
Sculpture, Ai Weiwei, conceptual art, everything else
Click here to cancel reply.