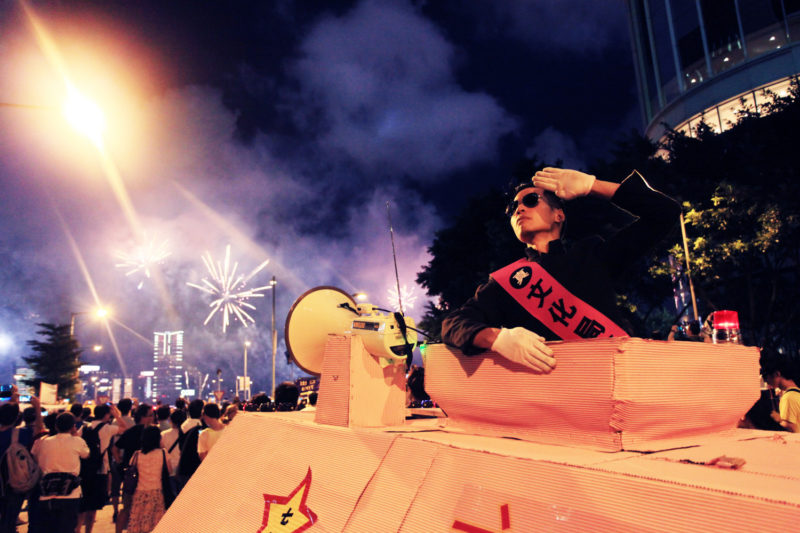 Ask any artists from China what art represents to them and many will reply that art represents a symbol of resistance. That is certainly the case for Kacey Wong (b. 1970), a 52-year-old artist who has been making waves in the Asian art scene for decades. Although he practiced in Hong Kong for many years, Wong was forced to recently flee from his home country.

Today, he lives in Taiwan for fear of being targeted by the government, thanks to Beijing’s strictly imposed national security law. This law was created to prohibit all acts of rebellion, secession, terrorism, and conspiracy with foreign forces. Wong is known for his use of satire and his works often criticize the government and those in power.

As such, the artist was forced to flee his country as it was no longer safe for him to continue pursuing art freely. Following crackdowns on expression and freedom of speech, numerous artists just like Wong have fled the country. Wong was inspired to start addressing political and social matters in 2011 after the arrest of fellow artist Ai Weiwei.

Employing both humor and sarcasm, Wong creates social and political artwork for the masses. Many of his projects have inspired resistance while also shining a light on Hong Kong’s censorship and political unrest. What’s so special about Wong’s work is that he invites the public to participate in his projects through social media and other open avenues.

By relying heavily on social intervention and activist agendas, Wong welcomes the public to be active participants in the change they want to see in society. His art projects investigate the space between men and their living environment with a social intention. He thinks being an artist is similar to being a detective; the case on hand is to investigate the self.

Wong’s mobile tricycle project Wandering Homes was featured at the 2008 Venice Architectural Biennale in Italy. His floating house Paddling Home was performed in Hong Kong’s Victoria Harbour and his mobile bulk bed Sleepwalker was the star feature during the 2010 and 2012’s Hong Kong & Shenzhen Bi-City Biennale of Urbanism\Architecture exhibition.

The artist built a pink tank out of cardboard, rode it through downtown Hong Kong, and threw fake money to real politicians and other real, local political parties to prevent them from putting up resistance against his imaginary Pink Party and demanded harmonious silence from them.

Executed just a few kilometers north in Mainland China, this performance would have him earned at least a jail sentence in one of their notorious prisons, currently temporary houses for many artists and other free spirits. 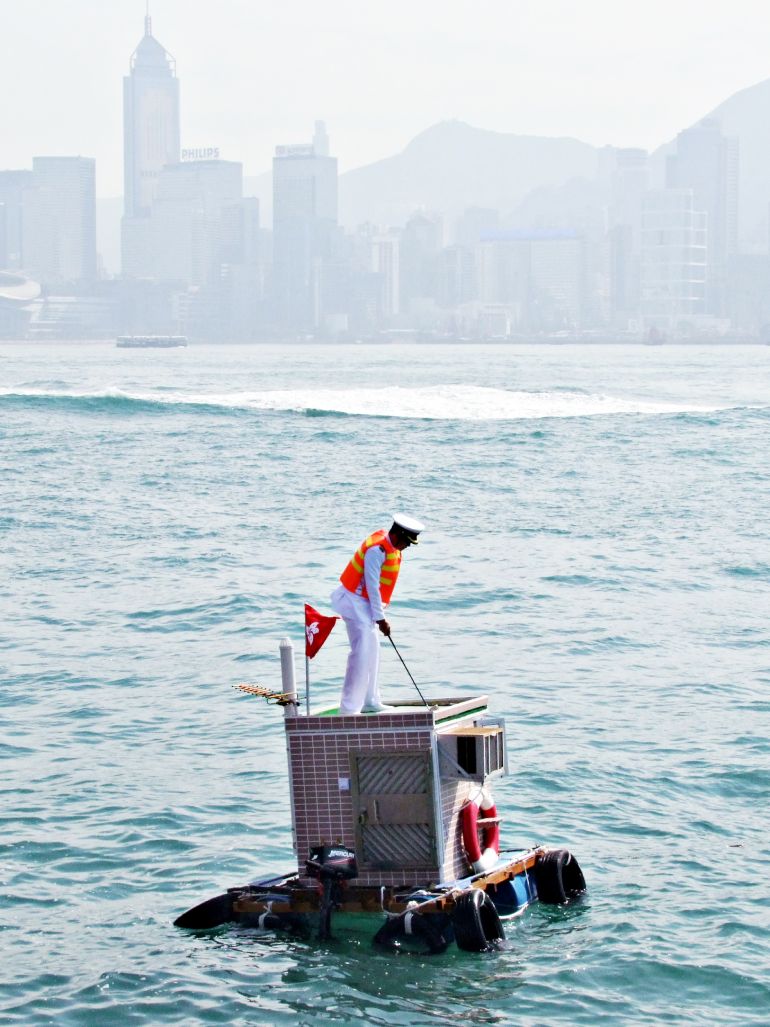 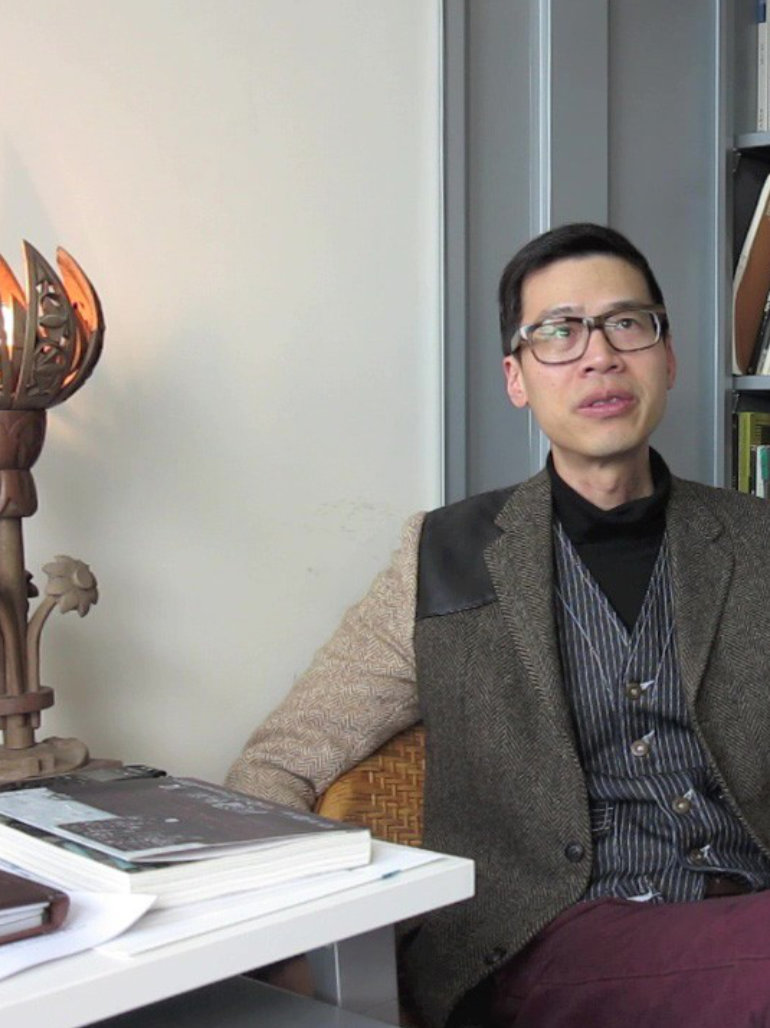 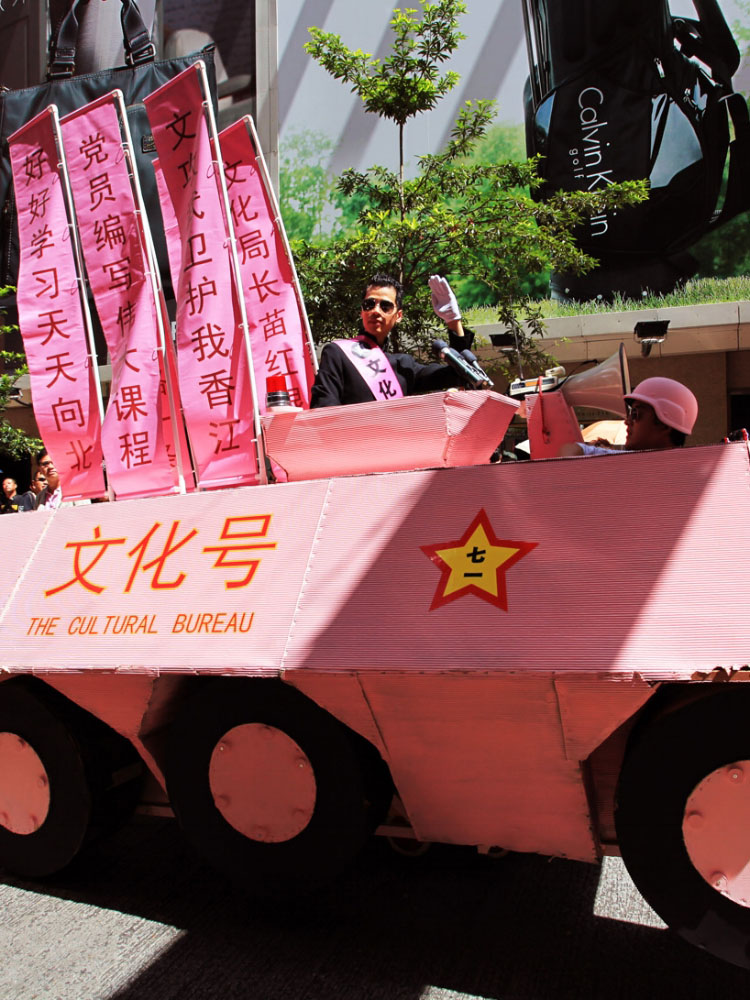