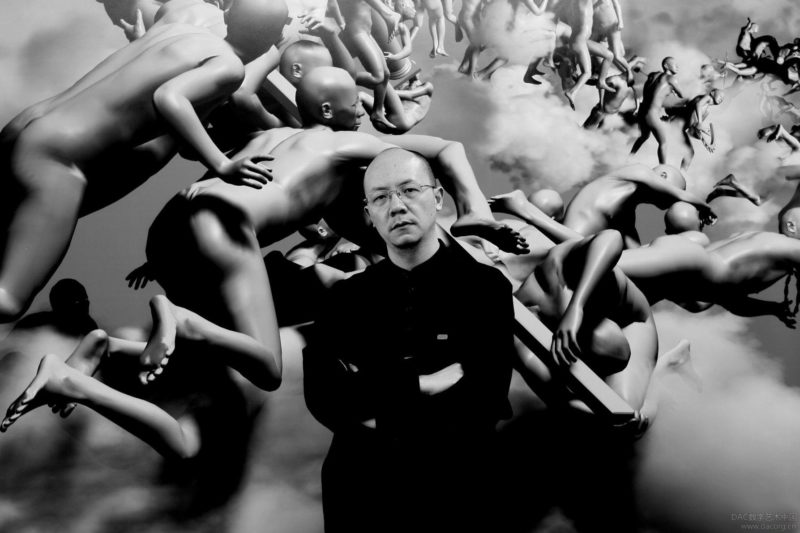 Miao Xiaochun was born in Wuxi, Jiangsu Province in China. In 1989, Xiaochun graduated from the Central Academy of Fine Arts in Beijing (CAFA). Today, Xiaochun also teaches in the same institution. He works in a variety of media ranging from photography to digital art.

Over the years, Xiaochun has dabbled in an array of media that ranges from digital artwork to photography. At the beginning of 2005, Xiaochun started exploring working with 3D animation predominantly.

His 3D works usually reference art history while also pointing out more extensive topics such as humans and machines, politics and societies in the East and West, and more.

Other recurring topics in his works are past and present, as well as humans and machines. Xiaochun considers the contrast between what we see as ancient and modern in relation to the length of the history of humanity.

Restart was created between 2008 and 2010. The artist wanted to create a conceptual world that shows the tensions between what is real and what has been fabricated.

Xiaochun intended to create a parallel fantasy to the chaotic and highly digitalized world that we experience today. The artist combined various central themes, including religion and science fiction, to conceptualize a futuristic vision of a world destroyed. The film also shows the different aspects of war in modern civilizations.

A considerable portion of the film was inspired by Pieter Bruegel’s work. Bruegel was a Dutch and Flemish Renaissance painter and printmaker. His work, the Triumph of Death, highlights a scene of an army of skeletons wreaking havoc across a desolate landscape. Throughout the film, the artist also made several references to Caspar David Friedrich’s works.

The first scene of Restart starts with Pieter Bruegel’s The Triumph of Death1. This complex and gruesome painting shows a group of skeletons placed in front of a dreary landscape. The painting that is part of the Museo del Prado’s collection shows also features fires, shipwrecks and a general sense of death and disaster.

The scenario used in the animation of the 3-D reconstruction is rounded out by further pictures from Bruegel: the “Fall of Rebel Angels” and “Mad Meg”, heading off to hell, as well as the “Seven Deadly Sins”, which have survived only as engravings.

The use of Raphael’s frescoes “Parnassus” and “The School of Athens” are clearly recognizable, while those less so are the allusions to paintings from Botticelli, Signorelli, El Greco, as well as key images from the 19th century such as Goya’s “The Third of May 1808″ and finally – with reproductive, plastic clarity – Courbet’s “A Burial at Ornans” and Géricault’s “The Raft of the Medusa”.

Several landscapes from Caspar David Friedrich are also made reference to. The canon of European classical art history is supplemented by the icons of progress of China’s cutting-edge technological and urban modernization.

In toto, it is a mighty undertaking and it is amazing how effortlessly the most varied objects of artistic, architectural, and design reference are combined in the almost 14-minute 3-D animation. (U. Panhans-Bühler)